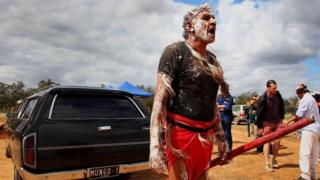 For decades, Australia's oldest human remains – an Aboriginal man who died about 42,000 years ago – have been stored at a university in Canberra.

But on Friday, the skeleton known as Mungo Man was returned to his traditional home in New South Wales and honoured with a ceremony.

It marked the end of a long campaign by indigenous Australians to return Mungo Man to his original resting place.

The discovery of the skeleton in 1974 helped rewrite Australia's history.

Research determined that Mungo Man had been buried in a complex funeral ritual, redefining scientific understanding of early Australians.

Who was Mungo Man?

The skeleton was unearthed by geologist Jim Bowler from a dry lake bed in Mungo National Park, about 750km (470 miles) west of Sydney, in what was hailed a major discovery.

Mr Bowler had already discovered the remains of a woman, known as Mungo Lady, in 1967.

The remains of Mungo Man were taken to the Australian National University in Canberra to be studied.

Scientists determined that Mungo Man had been a hunter-gatherer with arthritis who died around the age of 50.

He was buried on his back with his hands crossed in his lap, and covered with red ochre. Scientists believe the ochre was most likely sourced about 200km from the burial site.

Indigenous Australians from the region have long called for the remains to be returned, saying his removal caused great pain.

Representatives from the Mutthi Mutthi, Ngiyampaa and Paakantji/Barkandji communities held a ceremony to mark the occasion on Friday.

"So good to have him back after all those years he has been taken away," said Mutthi Mutthi elder Mary Pappin.

"We have been waiting all those years to get him back and I'm so glad he is back, to put him in his resting place."

He will be buried in a secret location in Mungo National Park. Mungo Lady was returned to the site in 1991.

The Australian National University relinquished the remains in 2015 and apologised for causing hurt over Mungo Man's original removal.

In an article for The Conversation in 2015, Mr Bowler wrote: "In 1974, in that remote saltbush country between the rivers, Aboriginal advice remained unavailable to us.

For the last two years, the remains have been kept at the National Museum of Australia in Canberra while repatriation plans were being finalised. His remains, along with 104 others, were collected earlier this week.

The recovery of ancestral remains has often been a source pain for Aboriginal Australians. Campaigners say many skeletons removed without permission are yet to be returned, with some housed in museums overseas.

In July, archaeologists found the first evidence to suggest that Aboriginal people have been in Australia for at least 65,000 years.