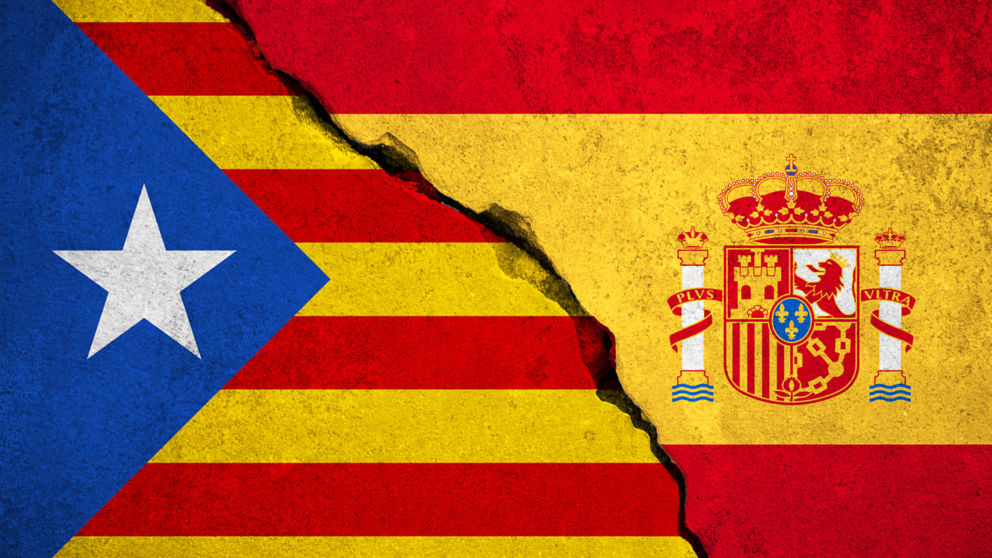 Behind the passion and frenzy of those who back Catalan independence, businesses are already feeling the impact of uncertainty.

In the heart of Barcelona, a crowd is gathering in Placa Sant Jaume. On one side of the square is the building that houses the parliament of Catalonia, opposite is the City Hall, and in between is a noisy mass of demonstrators, singing and chanting their support for Catalan independence.

There are flags, speeches and songs.

"We are here to tell the Kingdom of Spain that we don't need them," one protester tells me.

I leave the noise of the demonstration and take a short stroll from the Placa Sant Jaume.

Along the old, narrow streets are shops that are more empty than they should be. In one of them I find Elvira, the owner of a boutique that earns most of its money from tourists. Mention independence to her, and fury fills her eyes.

:: Catalonia: What next for Carles Puigdemont?

"Most of us still can't believe what's happened in the last month," she says. "It is incredible that in 30 days – look what has happened to one of the best cities in the world. These crazy people have broken everything. They're terrorists.

"Shops aren't selling. Businesses are leaving. 80% of my business is based on tourists, but now they're being told not to come into the centre of the city."

Elvira says her takings are down by 45% and claims neighbouring shops have seen the same fall. Fearful of what will happen to Catalan banks, she has moved her money out of her account in Barcelona, but remains nervous and angry.

"What will you do if Catalonia does win independence," I ask.

She shrugs: "Leave. Go somewhere else. Everything is horrible."

Many businesses have already gone. More than 2,000 have left Catalonia since the October referendum, including the biggest two banks, Caixa and Sabadell, both of which have moved their headquarters out of the region.

Others are biding their time, watching the situation carefully to see what happens next.

One of the biggest is Freixenet, the international sparkling wine company based in the town of Sant Sadurní d'Anoia.

Its president, Josep Lluís Bonet, is also the head of the Spanish Chamber of Commerce. We meet in the cellars, surrounded by 20,000 fermenting bottles. So, after a century in Catalonia, could Freixenet move?

"Above all is the survival of the company and that needs stability. The stability for our workers and stockholders. If we fall into in the case of independence – and I don't believe that will happen – we would become a Spanish multinational with presence in Catalonia."

Why, I ask, does he feel so negative about independence, when so many Catalans are in favour?

He shakes his head and smiles wistfully: "An independent Catalan would lead to an untenable situation for the next months, and years, a decade. It would be a huge step backwards for Catalonia and tragic for the well-being of Catalans.

"If we continue on this course then the wound will be deep and there's a chance it could affect the positive cycle of the economy."

The fear is that an independent Catalonia would find itself cut off from its biggest markets – that it would be denied a place in the EU and would face boycotts and tariffs when it tried to trade with Spain.

The message I heard from businesses across the region could be synthesised like this: "Why take the risk of jumping off a cliff, when we might not get any benefits?"

At Freixenet, a family-run company, Mr Bonet is prepared to talk publicly and accepts the criticism that comes his way.

Others keep a lower profile, but are still making contingency plans.

The biggest company in Catalonia, measured by either turnover or number of workers, is the car maker SEAT. Sources at the firm told me that they most prized stability and membership of the EU.

If either of those were to be affected, then I was told that, yes, even SEAT might plan to move out of Catalonia.

Andreu Mas-Colell is a globally celebrated economist, and he was once Catalonia's finance minister. He has spent years pondering how an independent Catalonia could survive and thrive.

"I know very few people who could really contemplate an independent Catalonia that is outside the EU," he tells me.

"It's not going to happen. There's no possibility of independence without Spanish agreement."

So that's the end of the matter?

"The play is not over yet. Catalonia will remain. It's possible in a hundred years."

By then, the world will be different, trade will have changed and so will borders.

But for the moment, it's hard to imagine that many businesses will conclude that the disruption and uncertainty of Catalan independence is a price worth paying.

IcetruckNovember 17, 2017
Like story:
tweet
Can France’s Macron bring Lebanon back from the brink?
Carillion in fresh plunge on latest alert