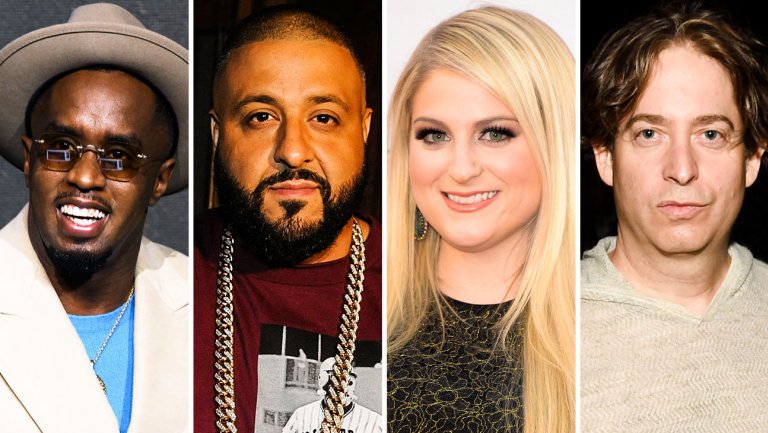 The duo, who will be joined by Meghan Trainor and music exec Charlie Walk, celebrated their new jobs with the most hyperbolic statements in recent memory.

With little more than a month to go before the launch of its new singing competition, Fox has cast some familiar talent for The Four. The network announced Friday that the series' panel will include Sean "Diddy" Combs, DJ Khaled, Meghan Trainor and record executive Charlie Walk.

As expected, The Four will have a swift premiere in the new year — getting out ahead of ABC's American Idol reboot and the next installment of NBC's The Voice. The series, billed as a six-episode event, kicks off Thursday, Jan. 4, at 8 p.m. ET. “Diddy, DJ Khaled, Meghan and Charlie are giants in the music space,” said Fox's Rob Wade, president of alternative entertainment and specials. “They understand what an artist needs to break through — from killer music and style to innovative marketing and social media. This is a show like no other, and we can’t wait to get started.”

The Four is yet another twist on the singing competition, the specifics of which are best explained in this story about the series' order, and comes to Fox as the genre is once again hot at the broadcast networks. American Idol, which took its own sweet time nailing down a judges panel, premieres on ABC on March 11, 2018.

All four panelists on The Four seem pretty jazzed about their new gigs, at least according to hyperbole-filled statements they shared via a Fox press release. I briefly considered keeping them out of this story, but who am I to deny the world their words?

Sean "Diddy" Combs
“This show is going to disrupt the world of competition television and will revolutionize the format. It took the right show and network to bring me back in the game. We plan on being the best talent show out there, taking it to that next level and making history again. This series is about pure competition, fighting for your survival. Do you want to win? Do you want to be great? We’re giving fans a genuine look at what it takes to make it to the top and stay there — surrounding these up-and-coming artists with the best, turning them into the next generation of stars.”

DJ Khaled
“I’m proud to announce that I will be participating in one of the most important, if not the most important events on television and pop culture. It’s a one-of-a-kind experience that will showcase the best of the new generation of musical geniuses. When you come from where I come from, you know just how hard it is to turn your dreams into a reality. It’s a long road to the journey of success. I’ve spent my career discovering amazing talent and working with the biggest icons from every corner of the globe and now I’m bringing my one-of-a-kind approach to FOX. I immediately jumped at the opportunity when I realized FOX shared the same vision as me, and that’s to be the best!!! If you think you have what it takes to become the next icon, trust me, DJ Khaled is the one that will let you know. So be prepared for a new era of television. All I know is how to win…more!!! FOX x DJ Khaled…be ready!!!”
Meghan Trainor
“When Fox asked me to be a part of this new series, without hesitation, my answer was…YES! I know firsthand what it’s like to be thrown into the music industry head first, as an artist and a songwriter. I also know what it takes to hang on for the ride. I’m so humbled to help discover new talent with this amazing panel of experts.”
Charlie Walk
“What lies at the heart of the music business is 'talent.' Discovering and developing talent remains the most important, consistent driver of my home, Republic Records, and now Fox's The Four: Battle for Stardom. I’m thrilled to be joining this incredible panel of my longtime friends, Sean, Khaled and Meghan, to help make the difference on a platform that’s truly committed to identifying and breaking the next generation of superstars. We will guide them, advise them, and be with them every step of the way on their journey, starting on the most transparent stage in television.”

Those interested in auditioning for what is possibly the most important event in television and pop culture can check out this website.