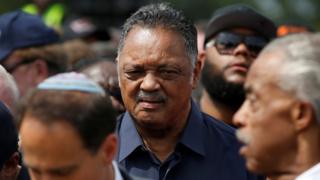 US civil rights activist Jesse Jackson has been diagnosed with Parkinson's disease.

"My family and I began to notice changes about three years ago," Mr Jackson, aged 76, wrote in a statement.

"After a battery of tests, my physicians identified the issue as Parkinson's disease, a disease that bested my father."

Parkinson's is an incurable neurological disease that can cause tremors and affect coordination.

MAJOR ANNOUNCEMENT to my friends and supporters on my health and the future. pic.twitter.com/JkuDNpxkix

"Recognition of the effects of this disease on me has been painful, and I have been slow to grasp the gravity of it," Mr Jackson said.

He said the diagnosis was "not a stop sign but rather a signal that I must make lifestyle changes and dedicate myself to physical therapy in hopes of slowing the disease's progression".

Mr Jackson fought for civil rights alongside Martin Luther King Jr in the 1960s. He was twice a candidate for the Democratic Party's presidential nomination, in 1984 and 1988, and his son Jesse Jr is a former US congressman.

He has remained an activist into later life, and spoke up last year in the wake of a spate of police shootings of black men, saying they were just one expression of a "mean-spirited division" taking hold of the country.

About 60,000 new Parkinson's diagnoses are made every year in the US, where the disease affects an estimated one million people.

"I am far from alone," Mr Jackson said.

"God continues to give me new opportunities to serve. This diagnosis is personal but it is more than that. It is an opportunity for me to use my voice to help in finding a cure for a disease that afflicts seven to 10 million worldwide."