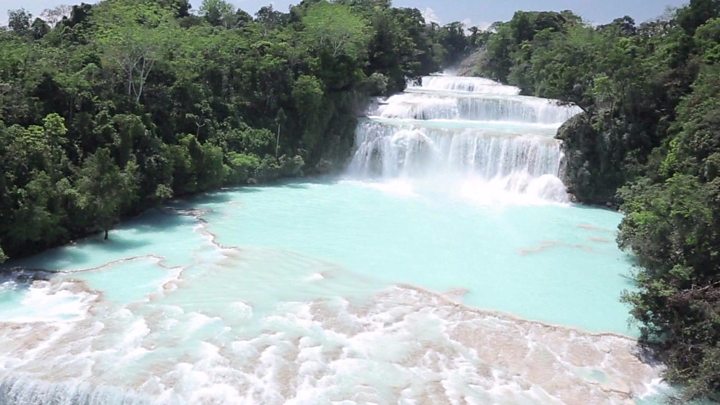 Mexicans have helped to restore one of the country's best known waterfalls, after it was affected by September's earthquake.

The Agua Azul cascades, in southern Chiapas state, are famed for their bright turquoise waters and attract thousands of tourists.

But the 8.2 magnitude quake altered the course of the river, causing the water level at the falls to drop.

Locals used picks and shovels to restore it, by shifting rocks and mud.

Authorities say they believe the falls should be back to normal within a month.

Local residents, who depend on tourism from the famous Agua Azul (blue water) falls, were alarmed when the cascades gradually slowed.

Government experts promised to investigate but local people decided to take action themselves.

They moved as much stone and sediment as they could to partially restore the Agua Azul river to its original course.

The normally turquoise water – a result of minerals from limestone rocks – also turned brown when the flow was restored but it is expected that the waterfalls will eventually return to their previous state.

Chiapas was badly hit by the earthquake on 7 September, which struck off Mexico's southern coast. Nearly 100 people were killed and hundreds of homes damaged or destroyed.

IcetruckNovember 17, 2017
Like story:
tweet
Nevada seeks to use untried execution drugs including opioid
‘How to Get Away With Murder’ Creator on That Insane Ending and the Show’s Future