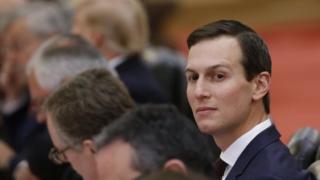 White House senior aide Jared Kushner failed to disclose emails he received about WikiLeaks and "a Russian backdoor overture" in 2016, senators have said.

The lawmakers said they became aware of the documents through other witnesses.

A lawyer for Mr Kushner, Donald Trump's son-in-law, said he was "open to responding to any additional requests".

Senate Judiciary committee chairman Senator Charles Grassley, a Republican, and Senator Diane Feinstein, top Democrat on the panel, wrote that the emails were omitted from documents Mr Kushner was asked to turn over last month.

"We appreciate your voluntary cooperation with the Committee's investigation, but the production appears to have been incomplete," they wrote in a letter on Thursday to his attorney, Abbe Lowell.

Mr Lowell said in a statement his client provided "all relevant documents that had to do with Mr Kushner's calls, contacts or meetings with Russians during the campaign and transition, which was the request".

The pair claim Mr Kushner, who is married to President Trump's daughter Ivanka, received emails concerning WikiLeaks as well as "documents concerning a 'Russia back door overture and dinner invite'", which he forwarded to other campaign officials.

The Senate panel said there are "several documents that are known to exist" because other witnesses provided documents which Mr Kushner was copied on, but did not disclose.

They claim Mr Kushner omitted some documents that mentioned individuals who were connected to the Russia inquiry. The senators are also are seeking his phone records.

"If, as you suggest, Mr Kushner was unaware of, for example, any attempts at Russian interference in the 2016 presidential election, then presumably there would be few communications concerning many of the persons identified," the senators wrote.

The letter also asked for any communications between Mr Kushner and ex-national security adviser Michael Flynn, who was forced to resign in February after he admitted to lying to Vice-President Mike Pence about a meeting with a Russian envoy.

Mr Kushner's lawyer has until 27 November to fulfil their request.

The two senators said Mr Kushner has yet to hand over promised transcripts from his interviews with both the Senate and House intelligence committees, which are also investigating Russia's role in last year's election and allegations of collusion involving Mr Trump's campaign.

US intelligence agencies believe Russia tried to help Mr Trump win the presidency by hacking and releasing emails damaging to his opponent, Hillary Clinton. The Kremlin has repeatedly denied the charges.

But the letter comes after Donald Trump Jr revealed that he had direct communication with WikiLeaks through private Twitter messages during the campaign.

Special counsel Robert Mueller is also leading an independent investigation into whether there were any links between Russia and the Trump campaign. Both deny there was any collusion.

Last month, former Trump campaign adviser George Papadopoulos pleaded guilty to having lied to the FBI about the timing of meetings with alleged go-betweens for Russia.