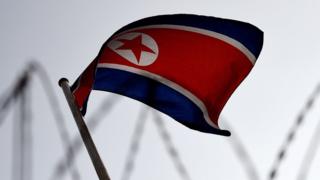 Singapore has suspended all trade with North Korea, a customs notice showed, as the UN and US seek ever tougher measures against the state.

Singapore Customs said commercially traded goods from or to the North were banned from 8 November. Offenders may be fined or jailed for up to two years.

It comes as UN sanctions were imposed after North Korea's sixth nuclear test.

Singapore was its eighth biggest trading partner in 2016, but that only made up 0.2% of the North's trade.

The latest round of UN sanctions targeted several firms and individuals, including two businesses in Singapore.

In January 2016, a Singapore firm was fined $125,700 for facilitating a shipment of arms from Cuba to North Korea after a court found the Chinpo Shipping Company was in breach of the UN sanctions on North Korea.

Tension in the Korean peninsula reached unprecedented levels earlier this year after Pyongyang's repeated missile tests, including two long range missiles that flew over Japan, and its sixth and biggest nuclear test.

The US and the UN are hoping that sanctions will starve the North of the means to pursue its aggressive programme of weapons development.

IcetruckNovember 17, 2017
Like story:
tweet
The Latest: May hopeful of progress on Brexit talks
WATCH: CTE detected for 1st time in living patient