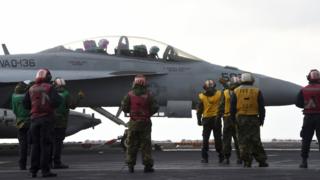 US Navy: Penis in sky drawn by jet trail was 'unacceptable'

US Navy officials have said it was "absolutely unacceptable" that one of their pilots used a jet's contrail to draw a penis in the sky.

The phallic outline over Okanogan County in the western US state of Washington provoked much mirth online.

But commanders at Naval Air Station Whidbey Island did not see the funny side and have ordered an inquiry.

A spokesman for the airbase confirmed that the aircraft involved was one of its Boeing EA-18G Growlers.

WARNING: Some viewers may find images below offensive.

The jet specialises in electronic warfare and can travel at nearly twice the speed of sound.

Spokesman Thomas Mills told the BBC: "From a Navy standpoint, we do hold our aircrew to the highest standards and this is absolutely unacceptable.

"It has zero training value and the aircrew is being held accountable."

The Federal Aviation Administration, a government agency that regulates US airspace, told local TV station KREM 2 that the manoeuvre did not appear to pose a safety risk and they "cannot police morality".

Plenty of onlookers on the ground were amused by Thursday afternoon's sky doodle.

Ramone Duran told the Seattle Times newspaper: "After it made the circles at the bottom, I knew what it was and started laughing."

But one householder told KREM 2 she was upset about having to explain to her children what the vapour trail's shape represented.

It is not the first aircrew to pull such a stunt.

In August this year, an RAF fighter pilot drew a 35-mile penis on radars monitoring skies over Lincolnshire, England.