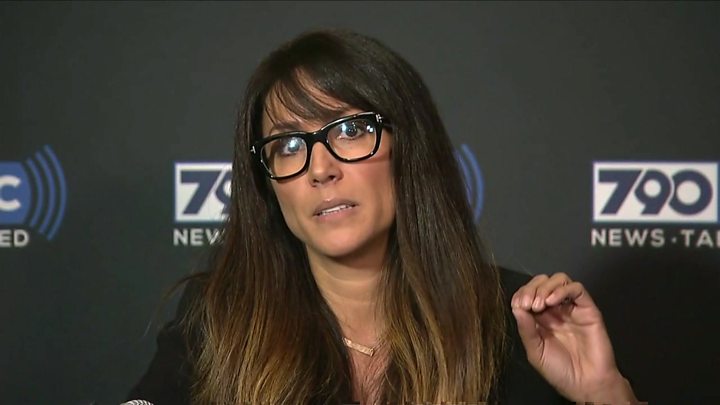 US Senator Al Franken has apologised to a woman who alleged that he groped her as she slept and "forcibly" kissed her in a rehearsal for a comedy skit.

Radio host Leeann Tweeden says both incidents happened in 2006 when she and Mr Franken, who was then a comedian, were on a tour for US troops overseas.

He "aggressively" kissed her while they rehearsed a scene, she wrote.

Mr Franken apologised for his actions, but said he had a different recollection of the kissing incident.

"I certainly don't remember the rehearsal for the skit in the same way, but I send my sincerest apologies to Leeann," the Minnesota Democrat said in a statement.

"As to the photo, it was clearly intended to be funny but wasn't. I shouldn't have done it."

Mr Franken later issued a second, longer statement following a ferocious backlash from critics who accused him of a non-apology and demanded his resignation.

In an article for KABC, a Los Angeles radio station where Ms Tweeden now works, she recalled feeling victimised by Mr Franken during her ninth tour of the Middle East.

"When I saw the script, Franken had written a moment when his character comes climbing at me for a 'kiss'," she said.

"I suspected what he was after, but I figured I could turn my head at the last minute, or put my hand over his mouth, to get more laughs from the crowd."

On the day of the performance in Kuwait, she said he was insistent they rehearse the skit.

But when the moment came he "put his hand on the back of my head, mashed his lips against mine and aggressively stuck his tongue in my mouth".

"You knew exactly what you were doing," she wrote. "You forcibly kissed me without my consent, grabbed my breasts while I was sleeping and had someone take a photo of you doing it, knowing I would see it later, and be ashamed."

The Democratic leader of the Senate, Chuck Schumer, called for the chamber's Ethics Committee to investigate Franken, saying: "Sexual harassment is never acceptable."

The Republican Senate leader Mitch McConnell echoed the call for an ethics investigation. Mr Franken said he would "gladly co-operate".

I want to apologize to Leeann Tweeden, to everyone who was part of the USO tour, to all who've worked for me, to all I represent, & to all who've considered me an ally & supporter & champion of women. I am sorry. https://t.co/vrLCIcggg6

In his second statement, he said: "I respect women. I don't respect men who don't. The fact that my own actions have given people a good reason to doubt that makes me feel ashamed."

Of the photo, he added: "I look at it now and I feel disgusted with myself… It's obvious how Leeann would feel violated by that picture."

But he still begged to differ on her portrayal of him forcing his tongue down her mouth.

"While I don't remember the rehearsal for the skit as Leeann does," he said, "I understand why we need to listen to and believe women's experiences."

Mr Trump has himself denied numerous allegations of sexual misconduct. During the second presidential debate, he was asked if he had ever grabbed anyone's genitals or kissed them without consent.

"Women have respect for me. And I will tell you: No, I have not," he replied.

He is yet to comment on the allegations of sexual misconduct against Republican Alabama Senate candidate Roy Moore, who denies the claims.

I'm pleased we made steps to curb military sexual assault today, but I hope we can go further to bring justice to those affected. -Al

As a senator for Minnesota, Mr Franken has cultivated an image for himself as a champion of women's issues.

Ms Tweeden said she was inspired to come forward more than a decade later after California congresswoman Jackie Speier was interviewed on her morning radio programme.

Mrs Speier told about being sexually assaulted as a young congressional aide in Washington.

IcetruckNovember 17, 2017
Like story:
tweet
Climate talks wrap up with progress on Paris rulebook
Comedy or not, ‘Get Out’ is a unique Oscar contender