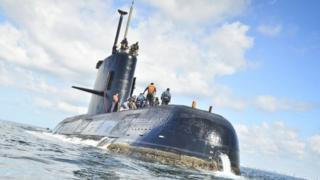 The Argentine navy is stepping up its search in the South Atlantic for a 44-crew submarine that has been out of radio contact for three days.

President Mauricio Macri said all national and international resources were being deployed to help find the San Juan as quickly as possible.

A Nasa research plane has joined the search for the vessel.

Britain and countries in the region have offered help after it disappeared 430km (267 miles) off the coast.

"We have not been able to find, or have visual or radar communication with the submarine," navy spokesman Enrique Balbi told a news conference.

The diesel-electric submarine was returning from a routine mission to Ushuaia, near the southern-most tip of South America, to its base at Mar del Plata, south of Buenos Aires.

The rescue operation has been formally upgraded to a search-and-rescue procedure after no visual or radar contact was made with the submarine, Mr Balbi said.

"Detection has been difficult despite the quantity of boats and aircraft involved in the search", he said.

The task of the rescuers has been further complicated by heavy winds and high waves.

Mr Balbi said that the number of hours that had passed since there had been any communication with the vessel was of concern.

"We expect that it is on the surface," Mr Balbi said.

The German-built submarine was inaugurated in 1983, the newest of the three submarines in the Argentine navy's fleet.

President Macri said the government was in regular contact with the crew's families.

"We share their concern and that of all Argentines," he wrote on Twitter. "We are committed to using all national and international resources necessary to find the ARA San Juan submarine as soon as possible."

A US Nasa P-3 explorer aircraft – capable of long-duration flights – is preparing to take part in the search, Mr Balbi said, in addition to a Hercules C-130 from the Argentine Air Force.

Brazil, Chile, Uruguay, Peru, and South Africa have all formally offered assistance in the search.