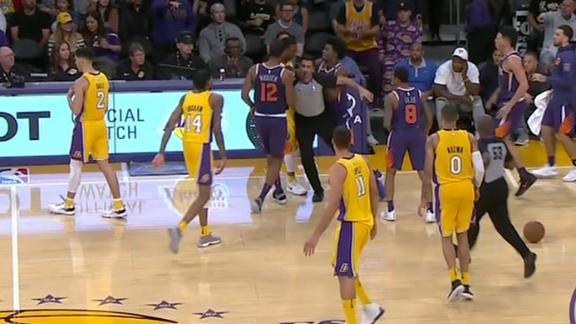 EL SEGUNDO, Calif. — Coach Luke Walton said a?teammate spoke to Lonzo Ball about the rookie point guard walking away from a scuffle toward the end of the Los Angeles Lakers- Phoenix Suns?game on Friday night.

While the altercation between Kentavious Caldwell-Pope and Tyler Ulis did not escalate as players from both sides broke things up, Ball walked by the two players as they refused to back down from another. When Caldwell-Pope and Ulis started shoving each other, Ball paused to look back and then kept walking to the Lakers bench before stopping again and looking from afar.

Wisconsin readies for showdown with Michigan

The tipping point between Goodell and Jones

"Someone on our team talked with him," Walton said after the Lakers' practice Saturday, without disclosing who it was. "It's all part of the learning process."

The even-keeled Ball explained that he was trying to avoid any further trouble.

Walton said he could "absolutely" see how some would consider what Ball did as being very smart.

"I thought [Ball] was smart just staying away from it," said teammate Brook Lopez, who walked over to try to break things up. "He was staying out of trouble. I feel like I'm big enough where I can get in the middle of it. I'm not going to do anything crazy. I'm just trying to get everything under control.

Walton was not concerned with how some on the internet were critical of Ball walking away from the scuffle.

"I don't really care about how that looks because our guys love Zo," Walton said. "He's one of the few rookies I've ever seen that everybody is just kind of drawn toward him. Everyone really wants him to succeed. They all love playing with his group, whether it's practice or the game.

"I think they all know what that looked like isn't what Zo is about and isn't symbolizing what his feelings are on that type of situation," Walton continued. "I know the general public and the internet world likes to do what they do."