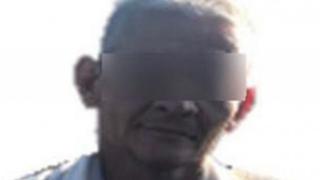 A Mexican suspect wanted in connection with the killing of 72 migrants in 2010 has died three days after being arrested by the police.

Martiniano Jaramillo was detained in a hospital in the north-eastern state of Tamaulipas where he was being treated for a pancreatic illness.

He was transferred to Mexico City where he subsequently died.

Police said Jaramillo led a drugs gang which kidnapped and killed the migrants from South and Central America.

The security forces said extensive detective work had led them to Jaramillo in the hospital where he was receiving treatment.

He was also accused of killing Miriam Rodriguez, a Mexican activist who was investigating her daughter's killing when she was herself murdered.

The killing of the 72 migrants drew international attention to the dangers facing migrants trying to reach the United States via Mexico.

It also shone a spotlight on his gang the Zetas and their cruel tactics.