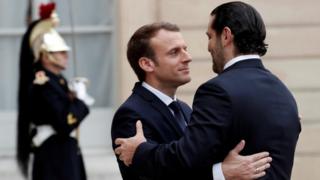 Lebanese PM Saad Hariri has said he will return to Beirut in the coming days, and will then clarify his shock decision to resign.

He quit two weeks ago during a visit to Saudi Arabia, but President Michel Aoun refused to accept the resignation.

Mr Hariri denied being held in Riyadh against his will, amid speculation the Saudis had forced him to quit as part of a regional power struggle with Iran.

Mr Hariri was speaking after meeting France's president in Paris.

Mr Hariri said: "I will go to Beirut in the coming days. I will participate in the independence celebrations, and it is there that I will make known my position on these subjects after meeting President Aoun."

What sparked this crisis?

It was during a trip to Saudi Arabia on 4 November that Mr Hariri abruptly announced he was resigning.

In a televised announcement, Mr Hariri accused Iran of sowing "discord, devastation and destruction" in the region. He also accused Iran's ally in Lebanon, Hezbollah, which is part of a national unity government that Mr Hariri formed last year, of destabilising his nation.

He also said he feared for his life. Several members of Hezbollah are being tried at a UN-backed tribunal at The Hague over the car-bomb assassination of Mr Hariri's ex-PM father, Rafik, in 2005.

President Aoun refused to accept the resignation, accusing the Saudis of holding Mr Hariri against his will. The Saudis and Mr Hariri have denied this.

"To say that I am held up in Saudi Arabia and not allowed to leave the country is a lie," Mr Hariri said in a Twitter post.

Saudi Arabia recalled its envoy to Berlin over comments by Germany's foreign minister suggesting Mr Hariri was being held against his will.

How are the Saudis involved?

Lebanon is a flashpoint in the decades-long struggle between Saudi Arabia – the leading Sunni Muslim power – and largely Shia Muslim Iran for regional influence.

There have been suggestions, denied by Saudi Arabia, that the Saudis had forced Mr Hariri to resign in an attempt to curb the influence of Iran and Hezbollah.

He left two of his children behind in school in Riyadh when he flew to Paris.

Why did Mr Hariri visit Paris?

France had offered to mediate in the crisis, inviting Mr Hariri for the talks.

However, President Macron has also had to clarify the invitation, saying France was not offering political exile.

Mr Hariri and his wife arrived overnight from Riyadh on his private jet and were taken to their Paris residence amid tight security, ahead of the meeting with Mr Macron.

President Aoun had welcomed the Paris trip, saying he hoped it would be a "start of a solution".

In a tweet on Saturday, Lebanon's president said Mr Hariri had told him by telephone that he would be back in the country by Wednesday.

This has now been backed up by Mr Hariri.

But after his meeting with Mr Macron, Mr Hariri is expected to visit a number of Arab capitals first.

Mr Aoun, whose party has an alliance with Hezbollah, has said Mr Hariri can only present his resignation in Lebanon and must stay there while a new government is formed.

IcetruckNovember 18, 2017
Like story:
tweet
How to Be Part of Hollywood’s Harassment Solution (Guest Column)
How George Clooney’s ‘Catch-22’ Love Brought Him Back to TV