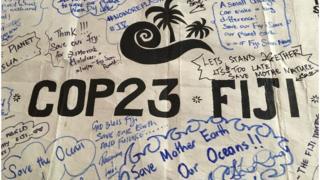 UN climate talks in Bonn have concluded with progress on technical issues, but with bigger questions about cutting carbon unresolved.

Delegates say they are pleased that the rulebook for the Paris climate agreement is finally coming together.

But these technical discussions took place against the backdrop of a larger battle about coal, oil and gas.

It means that next year's conference in Poland is set for a major showdown on the future of fossil fuels.

This meeting, known as COP23, was tasked with clarifying complex operational issues around the workings of the Paris climate agreement.

One of the most important elements was the development of a process that would help countries to review and ratchet up their commitments to cut carbon.

Fiji, holding the presidency of this meeting, proposed what's being called the Talanoa Dialogue.

Over the next year, a series of discussions will take place to help countries look at the promises they have made under the Paris pact.

"A key element in Poland is this Talanoa dialogue, to make sure it doesn't result in just a talk show," said Yamide Dagnet with the World Resources Institute.

"In Poland, ministers will have to look each other in the eye and say they will go home and enhance their actions, so that by 2020 we end up with national plans that will be a much more ambitious set of climate actions."

Looming over these discussions in Bonn was the question of coal, oil and gas.

US coal and nuclear companies organised a presentation here arguing that fossil fuels should be a key part of the solution to rising temperatures.

Optimistic would be too strong. Slightly less pessimistic would be more accurate. After two decades of grindingly under-ambitious conferences, at last a faint glimmer of light.

The flamboyant flourish of the Paris accord offered more dramatic cause for optimism, with its world leaders, hugs and tears.

But dull Bonn gave a more prosaic hint of what might be achieved if politicians can capitalise on a world shifting towards clean technology far faster than anyone could have expected.

Governments can now see a clean energy future is not just achievable but affordable. Many know they need to cut emissions further, and some are ready to do so.

However, the gulf remains between aspiration and actions. There is acrimony also over the lack of cash to help poor nations.

And the venue of the next annual meeting – Poland's coal capital Katowice.

So, the battle's not over, but real-world energy economics are on the cusp of overtaking politics as the main driver of climate protection.

And that's a glimmer indeed.

Their meeting was interrupted by dozens of singing protestors, who echoed the feelings of many delegates that unabated fossil fuels shouldn't be part of the future energy mix.

The US seemed to have a divided presence at this gathering.

Leaders from states and cities that want to stay in the Paris agreement were highly visible.

President Trump could "tweet his fingers off, but he won't stop us," said Governor Jay Inslee from Washington State.

"The President has said multiple times that he is willing to consider re-engaging if he can find or identify terms that are suitable, that are fair to the United States," he said.

That line didn't seem to impress many attendees who said there could be no re-negotiation.

Even the US official negotiating team struck a different tone from the White House when they made their national statement to the meeting. There wasn't a single mention of coal or fossil fuels.

Instead, it stated that the while the US might be out of the Paris deal, it wasn't walking away from international climate discussions in one form or another.

"The United States intends to remain engaged with our many partners and allies around the world on these issues, here in the UN Framework Convention and everywhere else."

In a further rebuff to those who came here to promote fossil fuels, the UK, Canada and Mexico, close allies and neighbours of the US, led a new global alliance to move away from coal.

Some 20 countries have signed up to end their reliance on unabated coal as an energy source. The Powering Past Coal Alliance hopes to have 50 members by the time of next year's meeting in Poland.

2018's summit in Katowice is seen as a critical junction on the road to making the Paris agreement work effectively when it comes into force in 2020.

By next December, the rulebook needs to be finished and there is to be a key review of carbon-cutting commitments made in 2015.

Many delegates are concerned that Poland's widespread and continued use of coal makes it unlikely that there will be decisive steps taken at the meeting.

Some observers believe that measures are being taken to ensure that Poland doesn't derail the momentum that has built up since Paris, and generally maintained here in Bonn.

"We had to leave Bonn with the process intact," said one seasoned observer.

"We now need a series of ministerial meetings in the coming months to make political progress on the key elements, so that we box in Poland over the next year."