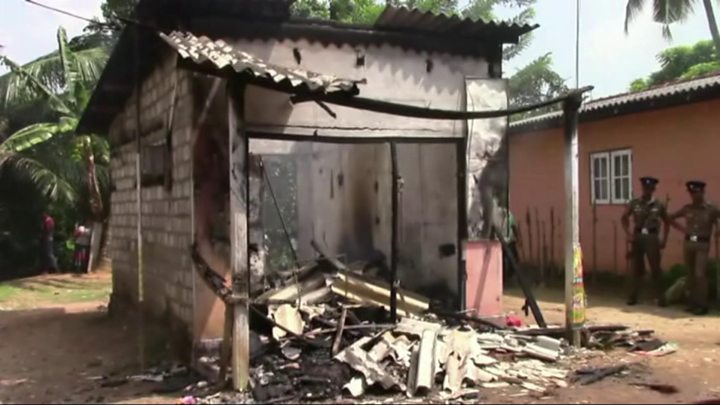 Riot police and army troops have been deployed in southern Sri Lanka following an outbreak of violence between Buddhists and Muslims, and a curfew has been imposed for the second night running.

Nineteen people were arrested when clashes erupted in Galle province, after a traffic accident.

Homes and businesses were attacked and several properties damaged.

Authorities say the sectarian violence has now been brought under control.

"Additional police battalions, the police Special Task Force, the anti-riot squad and the military were called in last night to bring the situation under control," Law and Order Minister Sagala Ratnayaka said in a statement.

He also warned people not to stir up sectarian hatred on social media.

MP Manusha Nanyakkara told the BBC that 10 vehicles were destroyed, the majority of which were owned by Muslims, and 62 homes and businesses were attacked.

He said the 6pm-6am curfew was imposed as a security measure to prevent further violence.

The outbreak of street violence between majority Sinhalese Buddhists and minority Muslims started after an incident involving a Muslim woman and a motorbike driven by a Buddhist man.

A police spokesman said people were arrested after "spreading false messages and rumours on social media" that contributed to the escalation in violence.

Similar clashes in a nearby area three years ago forced thousands of Muslims to flee their homes.