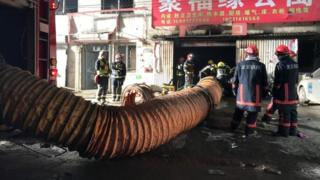 A fire in a housing block in a southern district of the Chinese capital, Beijing, has killed 19 people and injured eight others, reports say.

It took firefighters several hours to bring the overnight blaze under control. The cause is not yet known.

However, Beijing police say they have detained a number of suspects.

The blaze broke out in Daxing district, an area mostly inhabited by migrant workers from the inner provinces who often require cheaper accommodation.

Some of those trapped inside the building are now being treated in hospital, the fire department said.

The fire comes amid rising tension in Beijing over a beautification campaign implemented by the authorities in the city centre intended to close unsightly market stalls.

Rights campaigners say the drive has included the forced removal of migrant workers further from the city centre.