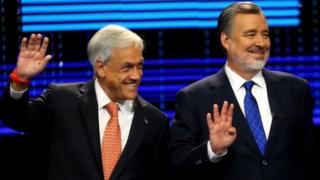 Chileans are voting in presidential elections to choose a successor to Michelle Bachelet.

Eight candidates are standing, with conservative billionaire Sebastián Piñera seen as favourite to return to the post he held from 2010-14.

Socialist contender Alejandro Guillier, a former journalist, is regarded as the most realistic challenger to Mr Piñera.

On Sunday, voters are also electing all 155 members of the lower house and half of the senate.

Mr Piñera, 67, has been leading in recent opinion polls. However, analysts say he may fail to get 50% of the votes needed to avoid a run-off in December.

In 2010, he became Chile's first conservative leader since the country's return to democracy, ending two decades of uninterrupted centre-left rule.

During the current presidential campaign Mr Piñera has managed to unite Chile's conservative wing, and enjoys backing of the business community.

His victory would represent another shift to the right in South America after the rise of conservative leaders in Argentina, Brazil and Peru.

He has pledged to continue a series of liberal reforms launched by Ms Bachelet, who is unable to seek immediate re-election under Chile's constitution.