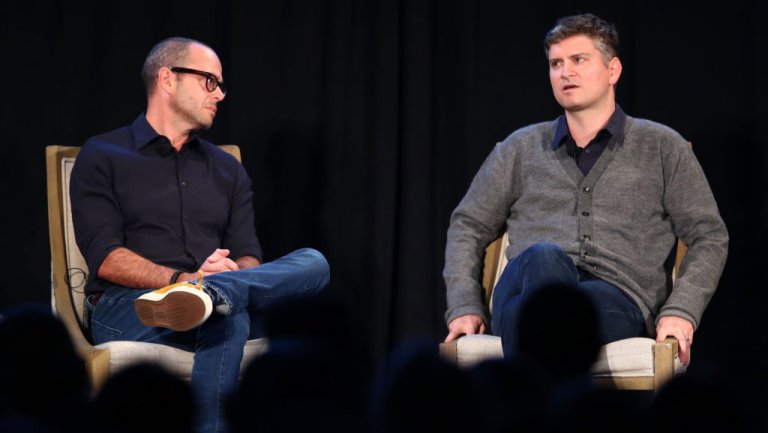 Damon Lindelof and Mike Schur Talk Harassment in Hollywood: "No One Didn't Know"

The two showrunners addressed the current scandals surrounding Hollywood in a wide-ranging panel at Vulture Fest on Saturday.

At first glance, Damon Lindelof and Mike Schur don’t seem like the most obvious pair. But dig a little deeper, and it’s clear the TV creators are a match made in heaven (or possibly hell).

Indeed, as Schur noted prior to the season one premiere of his acclaimed NBC comedy The Good Place, the series’ construction was heavily influenced by Lindelof’s Lost – so much so that Lindelof was one of the first people he called during the show’s development process.

Given that history, it’s no surprise the two found themselves on stage together at Vulture Fest LA on Saturday, ostensibly to discuss their careers, current projects, and all things TV. But given the current climate, the subject of sexual misconduct in Hollywood reared its ugly head very early on – and neither Schur nor Lindelof minced words.

“I wrote what I wrote, which is very minimal in this landscape, because it's how I felt,” says Schur. “I honestly don't remember when I first heard the rumors, but I knew for a fact that I heard them before the last time he came on the show. And so in my own reckoning of my own behavior, my own past, I'm like, ‘I didn't say anything. I'm complicit, just like anyone else is.’ So I felt like that sucked, and I wanted to say that I was sorry, whatever that amounts to, which isn't much.”

Schur went on to confess that during his time as a writer on Saturday Night Live, he witnessed questionable (albeit not criminal) behavior on the part of Kevin Spacey, another actor whose past transgressions have come to light in recent weeks.

“I mean if you think everyone knew about Louis, everyone knew about Kevin Spacey,” Schur continues. “I was on SNL from ‘98 to 2004, and I don’t remember when he hosted, but I remember very distinctly being like, he's hitting on the pages and he's hitting on the young men in the talent department. You talk about an open secret, it's the most open secret that's ever existed. I didn't know maybe the extent to which the behavior was predatory, certainly, but no one didn't know. Anyone who had ever worked with that guy knew that.”

For his part, Lindelof owned up to his own guilt – in his case, over the way he publicly echoed internet chatter revolving around Justin Theroux’s sweatpants on The Leftovers without stopping to consider the actor’s own comfort with the discussion.

“On The Leftovers, it kind of became a running joke that Justin Theroux wore these sweat pants in the pilot, and we kind of saw his genitalia bouncing around,” says Lindelof. “And this is something that people would ask Justin about. He'd go on talk shows and Conan [O’Brien] would ask him about it, or [Jimmy] Kimmel, and he would laugh about it, and I would say, ‘Justin Theroux has a great sense of humor about this.’ So you know, I'm gonna start talking about that in the press, or I'm going on Instagram and saying, ‘If you give us an Emmy nomination, Justin is gonna take his pants off.’ And I’m not thinking in terms that I'm like harassing him right now because he's a guy, and he's in on the joke. [But] I never asked Justin ‘is this cool?’ until it already happened, at which point I was extremely apologetic.”

Lindelof offered the uncomfortable anecdote as case in a larger point: That change can only happen if men in powerful positions reflect on their own privilege and deeply-held beliefs. As one of TV’s most powerful showrunners, he’s forced himself to confront his own culpability in the larger culture.

“I think a lot of men, particularly white men in positions of power in our business, look at themselves as an exception to the rule. 'I'm one of the good ones, I'm well intentioned, I'm liberal, I'm not a part of the problem, I'm a part of the solution,’” says Lindelof. “But I think that it starts with sort of a deep dive on yourself, and an analysis of your past behavior and if you're running a writers' room – and a lot of our shows have sexually explicit content on them – when are you making people uncomfortable? How conscious are you of whether everybody is laughing at the joke because you're the boss? Or, if you're actually looking at people's faces, are they actually uncomfortable?”

In Schur’s view, discussing the subject openly is a necessary first step in changing the culture of abuse.

“The larger [issue] was and continues to be that we just don't talk about his stuff,” he says. “Women and men to whom the behavior is being done, people it's affecting, are scared, they feel like they can't talk about it. They don't know who to talk to. In certain situations, there are scenarios where …there are very few other women even around in their environment, that they feel like even if they want to say something, they wouldn't even know where to go. …The conversation just comes to a halt. …and everyone's attitude is, this would be better if we didn't talk about this. And that going forward is obviously something that has to change.”

It was an unexpected start to a panel that perhaps only a month ago would have amounted to a lighthearted discussion between peers. But in the current age of mounting sexual misconduct allegations and ongoing political divisiveness, darker topics inevitably rose to the fore. At one point, Schur vocalized his distaste for the current president in no uncertain terms.

“I’ve shifted gears recently and have one predominant thought now about the president,” says Schur. “Which is I feel embarrassed for us, for the people of America, because the administration is so deeply stupid. [President Trump is] a very stupid person, and all of the people who work for him are very stupid. And they behave very stupidly and they do very stupid things all the time, so I have found that what my current predominant feeling is, is just shame, that we’re allowing ourselves to live under the rule of people this stupid.”

For anyone who follows Schur on Twitter, these sentiments will come as no surprise; the showrunner has become famous for his tendency to bash the current administration via his official account. “Every day I wake up and I feel like the political climate has poured syrup of ipecac into my mouth and if I don't vomit up my thoughts on Twitter really quickly, I’m just gonna die,” he says. “That’s how I feel. I feel like it’s a purge.”

Beyond merely functioning as a convenient vehicle for his rancor, Schur also believes in the platform’s potential to affect greater change, citing social media outrage over the ACA repeal (which ultimately failed to make its way through Congress) as one example. “As futile as it seems, it feels like sometimes, it can actually have some effect,” he says. “There’s nothing beyond that. There’s nothing beyond just a feeling of like, I may be screaming into a void, but I’d rather scream right now than stay quiet.”

Here was highlighted one of the biggest differences between Schur and Lindelof: The latter has sworn off Twitter altogether. Indeed, Lindelof seems to put more stock in the platform’s potential for destruction than he does in its potential for good. “We’re now living in a post-nuclear age, and we can’t put the genie back in the bottle,” he says. “And I use that metaphor with some degree of intention, because I’m not joking when I say we could literally be nuked because of Twitter. Like, that’s how dangerous this medium is.”

Not that Lindelof never sneaks a peek at the Twitterverse. Following the airing of The Leftovers’ series finale, he signed on to the platform to see how viewers had responded. What he discovered there was less than encouraging – at least for his own ego.

“I did a search on Twitter [for] ‘Leftovers,’ just to see what people were saying,” he says. “And it was like, ‘This is how you can heat up your pizza. This is how you can make a casserole with last night’s turkey.’ It gave me some perspective – [it] reminded me again that no one watches The Leftovers.”