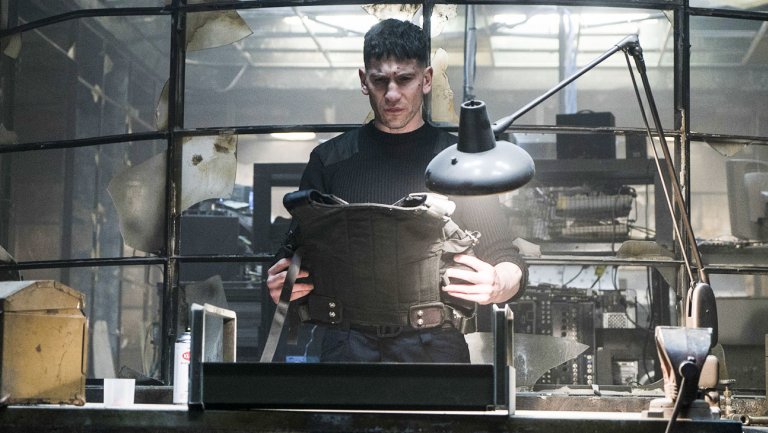 'Punisher': How Season 1 of Marvel's Most Violent Netflix Series Plays Out

[Warning: This story contains full spoilers for the first season of Marvel's The Punisher.]

Who would have predicted such an honest confession from Frank Castle (Jon Bernthal), the man known throughout the Marvel Universe as the Punisher? After spending 13 episodes killing any and every person involved in the deaths of his family, Castle finally walks away from the first season of his very own Netflix series a free man — but that freedom comes at the cost of taking a long look in the mirror.

During the course of The Punisher's first season, Castle finds himself swiftly drawn back into a life of vigilantism, on the hunt for the final people involved in murdering his family. As it turns out, there are plenty of men responsible for their grisly deaths, a scope far beyond Clancy Brown's Schoonover, the man Frank killed at the end of Daredevil season two — people who Frank was once closely aligned with during his time as a Marine, serving a black-ops unit that was secretly funded through an illicit drug trade. The top two enemies on the board: Rawlins, alias "Agent Orange," an unfeeling high-level spook played by The Sopranos and 24 veteran Paul Schulze; and Billy Russo, a name recognizable to fans of The Punisher comics, played by Westworld star Ben Barnes.

Russo, who has become the founder of a security firm called Anvil since his time at war (a project also funded because of his association with the heroin ring), is best known to Marvel readers as Jigsaw, one of the most iconic Punisher villains in his rogues gallery. (Indeed, he was previously portrayed by The Wire actor Dominic West in Punisher: War Zone.) In the Netflix series, Castle and Russo were as close as brothers during their time at war, with Frank having no idea about Billy's involvement in the conspiracy until it's almost too late. When Frank learns that Billy, a close family friend, is linked with the people who killed his wife and children, the quest for vengeance becomes all the more personal.

The series takes a momentary detour toward the beginning of the final stretch, away from Frank's hunt for Agent Orange, and focusing instead on another character who had been slowly boiling over in his own storyline: Lewis Wilson (Daniel Webber), a former soldier suffering from PTSD, who becomes a one-man army in a rampage against the people of New York City. Frank goes after Lewis due to the killer's association with Curtis Hoyle (Jason R. Moore), another of Frank's friends from his time at war, and the only one who remains a true Castle ally. In the process, Frank learns about Billy's affiliation with the men who killed his family, a development that leaves him thoroughly devastated.

Eventually, Frank violently murders Rawlins and his men, paving the way for a final confrontation with Russo. In the final episode of the season, they duke it out at the same merry-go-round where Frank's family was killed — a location selected by Russo, knowing it would be emotionally triggering for his trigger-happy opponent. In the end, despite sustaining multiple injuries (and it's worth noting that Frank's healing factor gives Wolverine a run for his money; seriously, is there anyone else in the Marvel Universe who bounces back from mortal wounds like Bernthal's Castle?), Frank grinds Russo's face into a mirror, disfiguring his old friend, and putting him on the path toward one day becoming Jigsaw.

Because Frank and his ally David "Micro" Lieberman (Ebon Moss-Bachrach) successfully dismantled this corrupt corner of the CIA, both men are eventually pardoned by the authorities, and are allowed to resume their lives. But what is freedom to a man like Frank Castle? It's a question that's thrown his way by CIA director Marion James (Mary Elizabeth Mastrantonio), and he apparently delivers the answer in the final scene of the season, in which Frank joins Curtis to sit among fellow veterans and opens up about his own trauma.

"As long as I was at war, I never thought about what happened next and what I was going to do when it was over," he says. "But I guess that's it, you know? I think that might be the hardest part, the silence. The silence when the gunfire ends. How do you live in that? I guess that's what you're trying to figure out. That's what you guys are doing. You're working on it. I respect that. If you're going to look at yourself, really look in the mirror, you have to really admit who you are, and not just to yourself. To everybody else. First time in as long as I can remember that I don't have a war to fight. I guess, if I'm going to be honest, I'm scared."

In revealing the truth about his fear of living a life without the pursuit of vengeance in his heart, Frank finally takes a long look at the man he's been seeing in his own reflection all season long — but given the Jigsaw teaser of an ending for Russo, Frank will likely go up against the man whose face was torn to shreds in a mirror sooner than later.

What did you think of how the first season of Marvel's The Punisher played out? Let us know in the comments section below, and stay tuned for more coverage of the season.