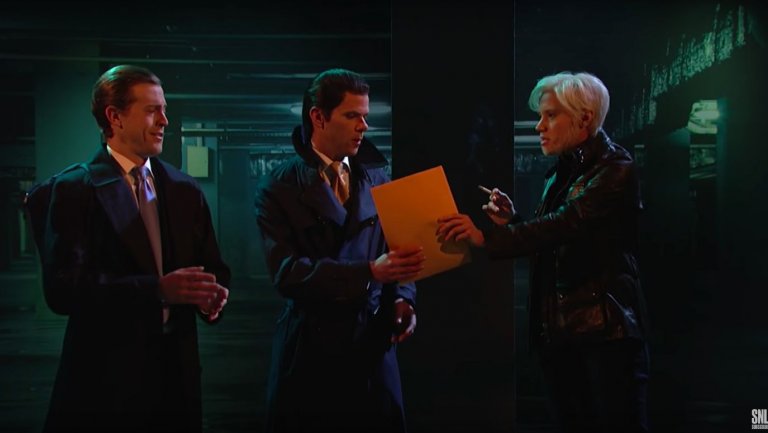 “I look forward to working with you, and when I say you, I do mean you, not necessarily Eric."

Saturday Night Live kicked off with a tale from the "Mueller Files," a riff on Robert Mueller, who is heading the special counsel investigating possible Russian collusion in the 2016 presidential election.

In a reenactment of events that may or may not have taken place during the run-up to the election, Kate McKinnon, sporting a white beard and leather jacket, impersonated Wikileaks founder Julian Assange to meet with Mikey Day’s Donald Trump Jr. in an abandoned parking garage.

Assange wanted to make sure Trump Jr. had come alone, who confessed his brother Eric (Alex Moffat) was waiting in the car nearby. "Not to worry, I told him to honk the horn if he gets scared," said the Trump Jr. character.

Immediately thereafter, a horn blasted and Eric joined the group.

“I want dirt on Hillary [Clinton],” Trump Jr. said, getting down to brass tacks. Assange then produced a manila folder with classified emails. Trump Jr. placed it into a Minions backpack that Eric was wearing.

“I look forward to working with you, and when I say you, I do mean you, not necessarily Eric,” Assange replied.

When it came time to introduce the show, Moffat's Eric had trouble with the pronunciation of the word "live" in the long-running late night show's title.