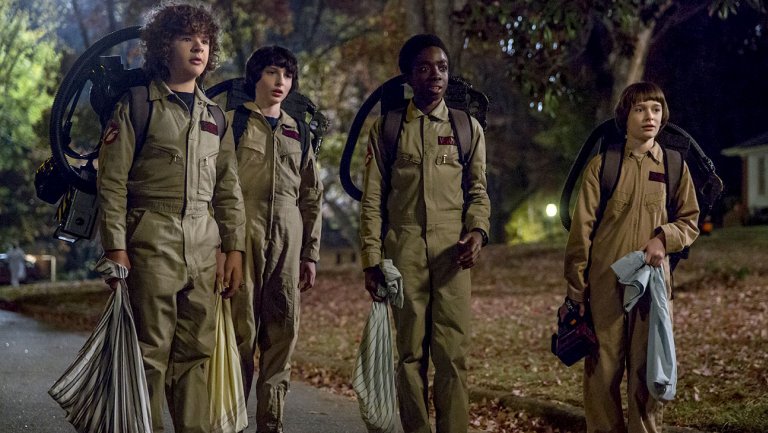 The creators and stars of the Netflix hit answered burning questions during a panel at Saturday's Vulture Fest.

Not only have the Duffers been forced to defend the urban-set standalone following backlash from fans, they’ve since admitted that they nearly cut it from the season altogether. But as they’ve explained, without “The Lost Sister” in the mix, they didn’t feel the ending with Eleven worked. Unfortunately for many viewers, the only episode to take place outside of Hawkins felt unnecessary and, arguably worse, like a showcase for some horribly cheesy ‘80s “punk” stereotypes.

“We were excited about spending a little time away,” says Ross Duffer of the episode. “We only say it’s like a movie, but it’s not. So some of it is us experimenting with the form, this eight hour, nine hour thing. ….So we got excited about taking a breather before we dive back in…and it annoyed some people.”

“It was intended to give you whiplash,” adds Matt Duffer. “Whether the whiplash was too strong or not, I don’t know.”

While the Duffers seemed a tad cowed by the negative fan reaction, Levy was quick to jump to the episode’s defense by citing its importance to the plot.

“It also brings Eleven back at the end of Episode 8 with so much power,” says Levy. “Whether people love or don't love Episode 7, we always knew the boys wanted to try something bold. And it does allow Eleven to learn about the source of her powers and gain more, which we would need for Episode 9. So her going away makes that return at the end of episode 8 so powerful.”

“Whether or not you like the episode, it’s really powerful, and [it’s] people taking risks,” adds Berthelsen, who originally hails from Denmark.

While fans eagerly await a Season 3 announcement, the Duffers say they’re in the “very early days” of plotting out the potential season. “That’s not official, that wasn’t an official announcement,” Ross Duffer says after confirming they’re actively working the storyline. “We’re just working on it, just for our own amusement – for fun.”

That said, given the show’s massive success the Duffers are aware of how ridiculous it would be if the show didn’t return for another season. Matt Duffer cites Berthelsen’s character Kali as just one reason why they feel the need forge ahead. “It feels weird to me that we wouldn't solve [her] storyline,” he says. “I would say chances are very high she comes back.”

As anyone who watched Season 2 knows, the Duffers packed a lot into its nine episodes, and they admit they felt some pressure to answer to fan demands on at least one front: #JusticeforBarb. Indeed, they claim Netflix even added notes reminding them to wrap up her storyline. In an already plot-heavy season, it was just one more element to juggle, but they knew that fans would be up in arms if they failed to offer closure.

“The Justice for Barb stuff ended up taking a lot more time then we initially thought it would,” says Matt Duffer, who gave props to Shannon Purser for making such a strong impression in the role. “It was a small role, but then Shannon did something [great] with it.”

The Stranger Things panel was wide-ranging and raucous, with fans packed liked sardines into a cavernous room at the Roosevelt. Here are a few more highlights from the discussion:

Paul Reiser’s character was written as “Dr. Reiser” in the script – before Reiser was even cast.

“It was always Dr. Reiser,” says Matt Duffer. “We never had another [name]. … I don’t think we’d even written a script yet.”

Adds Reiser of being cast, “I’ve never had a meeting like this. Two terrifically talented guys, and they already want you.”

Sean Astin’s character originally died much earlier in the season.

“Part of why the show is weird…[is that none of us] know how to do a TV show,” says Levy. “Bob was gonna be dead by Episode 4.”

The relationship that develops between Dustin and Steve wasn’t originally in the script.

“The entire Dustin-Steve relationship didn’t exist,” says Levy. “They came up with that whole storyline while we were shooting Episode 4.”

Adds Matt Duffer: “It was something that connected with a lot of people [during shooting], and we just started leaning into it more and more.”

All the other actors knew that Dustin would be dancing with Nancy (Natalia Dyer) in the series finale before Gaten Matarazzo did, and they kept him in suspense until it happened.

Kila was originally written as a thirtysomething man.

“Initially we were actually looking for a guy, that Eleven would have a brother,” says Matt Duffer. “We were looking for 30 year old men. …[Nobody] was that interesting to us and we said, ‘Let’s open this up, let’s open it up to women.’ …. And [Millie Bobby Brown and Berthelsen] had I think a really powerful connection.”

Both the Winston Ghostbusters joke and the Three Musketeers bit came out of actual arguments in the writers’ room.

“The Ghostbusters [joke] was an argument about which kid would be which character,” says Matt Duffer. “And the Three Musketeers argument was a real argument we had…suddenly a debate about candy bars can get fairly heated.”

The Shadow Monster was inspired by Jaws.

“The monster we always saw as Jaws, as a shark,” says Ross Duffer “What if something was more sentient in the Upside Down….something that actually had drive?”

The Duffers are done telling David Harbour any plot spoilers.

“We can’t tell David anything anymore,” says Matt Duffer. “He’s cut off. He tweets it, he puts it on Instagram, he tells every journalist he can find…I’m not telling him anything.”

Speaking of plot spoilers, Wolfhard has some very adult advice for you.

“Contracts matter,” he says. “If you ever sign a contract, it matters. Trust me.”

There probably won’t be a musical episode in Season 3. Unless…

“I said that earlier and it was like a joke,” says Wolfhard. “But I have my idea, we [do a] crossover with Hamilton…it’ll be Episode 7.”