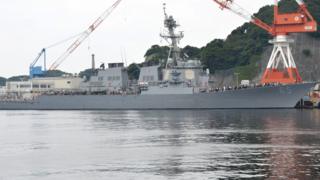 US warship and Japanese tug collide in latest incident

A US warship has sustained minor damage after a collision with a Japanese tug off central Japan, the US Navy says.

The commercial tug lost propulsion and drifted into the guided-missile destroyer, the USS Benfold, during a towing exercise in Sagami Bay.

"No-one was injured on either vessel," the US Navy says, adding that an investigation is under way.

This is the latest in a series of incidents involving US warships in recent months.

In a statement, the US Navy says the warship "sustained minimal damage, including scrapes on its side".

"Benfold remains at sea under her own power. The Japanese commercial tug is being towed by another vessel to a port in Yokosuka."

In August, 10 US sailors were killed when the USS John S McCain and an oil tanker collided east of Singapore.

In June, seven US sailors died in a collision between the USS Fitzgerald and a container ship in Japanese waters near the port city of Yokosuka.

In May, a guided-missile cruiser and a South Korean fishing vessel collided, while in January another cruiser ran aground near the fleet base in Yokosuka.

The US has recently announced a series of reforms aimed at increasing naval skills and alertness at sea.

IcetruckNovember 19, 2017
Like story:
tweet
Zimbabwe: Mugabe to meet with army chief on his future
Signals from missing Argentine sub give hope for rescue effort