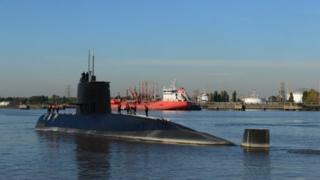 Specialist underwater rescue equipment has arrived in Argentina from the United States to help hunt for an Argentine submarine which vanished last Wednesday with 44 crew on board.

More boats and planes have also joined the search, which has been hampered by heavy winds and high waves.

The vessel disappeared 430km (267 miles) off the Argentine coast.

Signal from the sub?

On Saturday, satellite signals believed to have come from the sub were detected near the Valdez peninsula.

But the secretary general of the Argentine navy, Rear Admiral Jorge Lorenzo Cisneros, warned that the signals had been "very weak and of short intensity".

The seven satellite messages lasted from 4 to 36 seconds but failed to connect.

He said the navy had not yet been able to confirm that the failed calls had come from the missing vessel.

US satellite company Iridium said in a statement that while one of its satellite phones was on board the submarine, the seven signals detected on Saturday did not come through its network

Iridium said the last call made from its satellite phone on board the submarine was on 15 November, the day the vessel vanished.

Teams from several countries have intensified their efforts in the South Atlantic to find ARA San Juan.

The US Navy has sent a second ship with special tracking equipment and deep-sea rescue modules to join the search.

Chile and the UK have sent extra aircraft to scour the area.

Argentine navy spokesman Capt Enrique Balbi said 11 boats and 10 planes from Argentina, Brazil, Chile, Peru, South Africa, Uruguay, the UK and the US were currently taking part in the search.

On Saturday, a Nasa research plane equipped with magnetometers, infrared cameras and other sensors that can detect a submerged submarines flew over the search area but did not detect the missing vessel.

Its last contact with navy command was on Wednesday morning.