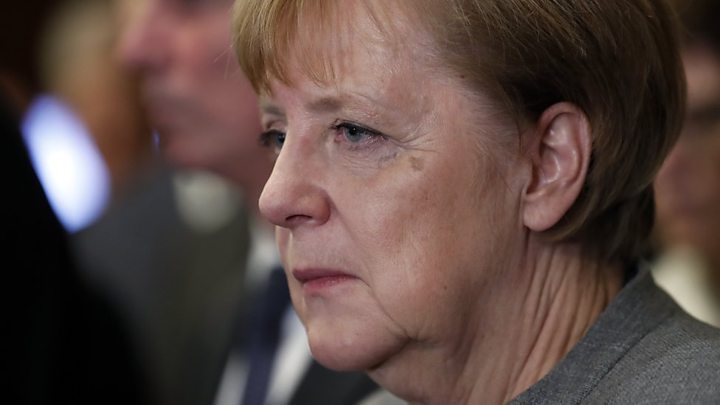 German Chancellor Angela Merkel has said she would prefer new elections to leading a minority government, after a breakdown in coalition talks plunged the country into political crisis.

She also said she did not see any reason to resign from her post despite the failed negotiations.

On Sunday evening, the FDP liberals pulled out of talks with Mrs Merkel's CDU/CSU bloc and the Greens.

Germany's president called on parties to "reconsider their attitudes".

Frank-Walter Steinmeier urged them to make compromises for Germany's "well-being", amid a situation he said was unprecedented.

Mrs Merkel faces her biggest challenge in 12 years as chancellor.

"The path to the formation of a government is proving harder than any of us had wished for," she told broadcaster ARD.

But she said she was "very sceptical" about a minority government, adding that "new elections would be the better path".

In a separate interview with the ZDF broadcaster, she argued Germany needed stability and a government "that does not need to seek a majority for every decision".

The elections were held in late September.

Some in Mrs Merkel's party still hope for another grand coalition with the Social Democrats (SPD), despite that party repeatedly ruling such an option out.

Earlier on Monday, SPD leader Martin Schulz said his party was "not afraid of new elections".

'Politicians have a responsibility'

When asked about the prospect of another alliance with the SPD, Mrs Merkel told ZDF she would wait to see what came of upcoming talks between President Steinmeier and SPD leaders.

However, she said a demand for her to resign would not make a positive start for a new coalition.

If fresh elections are to happen, they would need to be called by Mr Steinmeier, after a long drawn-out process that would take months.

But he appears to view new polls as a last resort. In a brief address earlier on Monday he told politicians they had a responsibility that could not just be handed back to voters.

"Inside our country, but also outside, in particular in our European neighbourhood, there would be concern and a lack of understanding if politicians in the biggest and economically strongest country [in Europe] did not live up to their responsibilities," he said in a statement.

Negotiations between the pro-market FDP, the Greens and the conservative CDU/CSU bloc had gone on for four weeks before the FDP's surprise withdrawal late on Sunday.

Mrs Merkel blamed the FDP for the collapse, saying that the parties were on the "home straight" when the liberals pulled out.

But FDP leader Christian Lindner has defended his party, saying it "did not take such a decision lightly".

Despite Mrs Merkel's words about a fresh poll, analysts say the new elections would be likely to benefit the anti-Islam, anti-immigrant AfD most, so other parties would probably try to avoid them.

The far-right AfD won 12.6% of the vote in the September elections, entering parliament for the first time with more than 90 seats.

Just how far to the right is AfD?