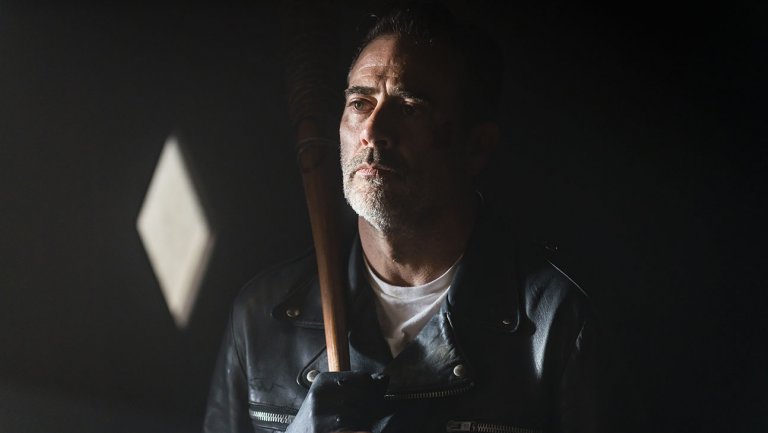 How 'Walking Dead' Gave New Life to its Nastiest Nightmare(s)

[Warning: this story contains spoilers for season eight, episode five of AMC's The Walking Dead, "The Big Scary U," as well as major spoilers from the comic books on which the show is based.]

Given its premise, AMC's The Walking Dead is a series steeped in impossibilities — and with its latest episode, it just began a story most people would have found impossible beforehand: Negan's redemption.

Jeffrey Dean Morgan's smirking psychopath stood front and center over the course of "The Big Scary U," an episode that saw Negan and Father Gabriel (Seth Gilliam) working to find some common ground so they could fight their way out of a deadly situation, trapped inside a trailer and surrounded from the outside by countless walkers.

During their time together, Gabriel decided that the reason for his own continued survival was to take Negan's confession. Naturally, Negan isn't a man who feels he has much to fess up to, not even the deaths of Abraham (Michael Cudlitz) and Glenn (Steven Yeun). According to the man himself, Negan killed "the widow's husband and the ginger," but it's Rick (Andrew Lincoln) who got them killed — and that's the worse of the two sins. Your mileage may vary on that particular point.

Instead, Negan finds something else to confess: the guilt he carries over the death of his wife, killed after the apocalypse began. It's a quiet moment of emotionality from the show's most menacing monster, and an incredibly rare one at that. One can count the number of times The Walking Dead has presented Negan in an emotionally vulnerable and sympathetic light on the stump of a hand Merle Dixon (Michael Rooker) was left with once upon a time, or comic book Rick if you prefer. But Negan's confession is enough to move Gabriel into finally teaming up with the Savior, even if he's not entirely convinced that the man has been redeemed yet.

"I think it may have changed somewhat," Gilliam tells THR about whether or not Gabriel's time with Negan has impacted his view of the Saviors' leader. "I think he has a better understanding of what Negan means as a leader to his group, and what his idea of leading is, and what his ideas of redemption are. I think he has a little bit more respect for him. But at the same time, I think he still sees him as a psychopath who kills people with a baseball bat."

The newly introduced Negan backstory owes roots to the Walking Dead comic books created by Robert Kirkman, who explored the villain's origin in a one-shot called "Here's Negan." The story Negan tells to Gabriel mirrors the content of that comic, even if the comic itself wasn't brought to life on the screen. Beyond the one-off tale, Negan's history is explored in the proper Walking Dead comic book during a battle between Alexandria and the Whisperers, a group of enemies who walk among the walkers and wear rotting skin suits as disguises. That story takes place years in the future, as teased in the 100th episode of the AMC series — a time period where Negan very much still exists, and even fights on Rick and company's behalf.

"That story works best when Negan has been around for many years," Kirkman previously told THR about whether or not The Walking Dead would ever explore Negan's backstory. "I'm not going to go on record to say that Negan lasts as long in the show as he does in the comic. You never know. But if we do get to that point, it'd be nice to see that story adapted. I love Jeffrey Dean Morgan with a burning fury of a thousand suns and I would love to see him tell that story and see the character go through those paces. It's a great way to get more context into who this guy is. It'd be neat but there are no plans as of yet."

Looks like those plans have finally come to pass, if only through Jeffrey Dean Morgan's monologue.

Should we count this as the beginning of the Negan redemption arc? Not so fast. There was another nod to the comics in this past episode that could give Negan new life as a monster. In order to escape the trailer, Negan and Gabriel cover themselves in zombie guts and gore. Negan openly wonders if you can get sick from coming into contact with the infected viscera — something that should attract viewers' attention, as the episode ends with Gabriel sweating profusely, as though he's suffered a zombie bite.

We never saw Gabriel sustain any such wound, but if he's sick because of prolonged exposure to walker blood, it would line up with the act of germ warfare Negan and the Saviors wage on the Alexandrians in the comic books' original version of "All-Out War." There, Negan's soldiers dip their bullets and weapons in zombie fluids, which they use to infect their enemies. Indeed, Dwight (Austin Amelio) even shoots Rick with what appears to be an infected arrow, though we later come to learn that the arrow wasn't infected at all; thanks for staying on the right side of things, Dwight!

Given its central role in the end of "All-Out War," one imagines the germ warfare assault will remain intact for the Walking Dead TV series — quite possibly utilized by Eugene (Josh McDermitt), the man who discovers the sick Gabriel at the end of "The Big Scary U." In other words, even if it looks like Negan is currently in line for some redemption, it's still worth fearing the King of the Saviors.