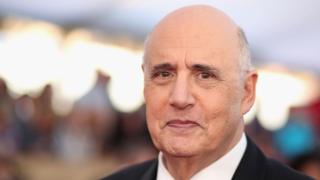 The star of Transparent has signalled he is leaving the show after being accused of inappropriate behaviour.

"I don't see how I can return," Jeffrey Tambor said in a statement.

Last week the Emmy-winning actor said he was "not a predator" after two transgender women working on the Amazon show made claims against him.

Tambor again expressed regret if his actions had been "misinterpreted" but denied he had ever "deliberately harass[ed] anyone".

His apparent departure from the Amazon drama follows reports the studio was investigating claims he acted inappropriately towards his personal assistant.

This prompted Trace Lysette, an actress on the show, to accuse him of pressing himself against her while filming the show's second season.

"Playing Maura Pfefferman on Transparent has been one of the greatest privileges and creative experiences of my life," Tambor said on Sunday.

"What has become clear over the past weeks, however, is that this is no longer the job I signed up for four years ago.

"I've already made clear my deep regret if any action of mine was ever misinterpreted by anyone as being aggressive, but the idea that I would deliberately harass anyone is simply and utterly untrue.

"Given the politicised atmosphere that seems to have afflicted our set, I don't see how I can return to Transparent."

Tambor is the latest in a string of Hollywood actors to be accused of sexual harassment in the wake of the Harvey Weinstein allegations.

Amazon had reportedly already been exploring ways for the show to continue without its 73-year-old lead.