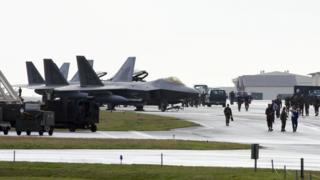 The US military has banned all troops stationed in Japan from drinking alcohol, following a deadly crash on Okinawa island linked to drink driving.

In addition, soldiers on Okinawa are banned from leaving their base and their residences, the US military said.

On Sunday, a US soldier crashed his truck into a mini van, killing the local driver of the other vehicle.

Okinawa hosts more than half of the US' troops in Japan but locals have long resented the heavy military presence.

In a statement, the US military confirmed that one its service members was involved in the accident and said that "alcohol may have been a factor".

The military also announced "mandatory training to address responsible alcohol use, risk management and acceptable behaviour" for all its troops across Japan.

The US presence on Okinawa, located around 640km (400 miles) south of Japan and off the coast of China, is a key part of the US-Japan security alliance.

There are plans to relocate part of it to a less-populated area of the island, but many Okinawans want the air base removed altogether.

Many Okinawans object to the alleged crimes and accidents attributed to the troops. Resentment at the US presence has been growing among many locals, particularly since the 1995 gang-rape of a 12-year-old girl by US troops.

In 2016, the murder of a woman was linked to an ex-Marine employed at one of the bases, also leading to a temporary ban on alcohol as well as a midnight curfew.