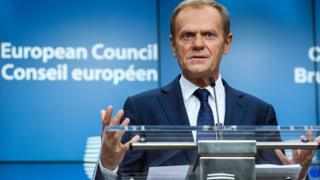 The Polish government has accused EU Council President Donald Tusk of "attacking Poland" after he voiced alarm at the government's policies.

"Today, by using his position to attack the Polish government, he is attacking Poland," Prime Minister Beata Szydlo tweeted. Her nationalist government has been in power for two years.

The two leaders have long been rivals.

Ms Szydlo's Law and Justice Party (PiS) is in dispute with the European Commission on several fronts: its refusal to accept refugees under an EU relocation scheme; its encouragement of logging in an ancient forest; and its refashioning of Poland's media and judiciary. The commission accuses PiS of jeopardising EU rule of law values.

In a tweet in Polish on Sunday, Mr Tusk. a centre-right liberal, said: "Alarm! Severe dispute with Ukraine, isolation within the European Union, departure from the rule of law and judicial independence, attack on the nongovernmental sector and free media. Is this a Law and Justice strategy or a Kremlin plan? Too similar to sleep peacefully."

Mr Tusk's reference to the Kremlin appeared to link PiS to alleged Russian interference in EU countries and Ukraine.

EU says it will sue Poland over reforms

Poland has been one of the most vocal critics of Russia since Moscow annexed Ukraine's Crimea peninsula in 2014 and backed pro-Russian separatist rebels in eastern Ukraine.

In recent years Poland has backed Ukraine's drive for closer ties with the EU, but much bitterness remains in Polish-Ukrainian relations.

A row erupted on Saturday when Polish border guards refused to allow in the head of Ukraine's commemoration commission, Svyatoslav Sheremet.

Poland's state-owned news agency PAP said the move was in response to a Ukrainian ban on the exhumation of Poles killed in Ukraine during World War Two.

Mr Tusk "has been unable to carve out an active role in European politics for himself, so he is trying to plunge back into Polish politics", he said.

In March Ms Szydlo tried and failed to block the European Council's reappointment of Mr Tusk as council president, at an EU summit. She was the only leader to oppose Mr Tusk among the 28 member states.

There is speculation that Mr Tusk is preparing for a presidential bid in Poland once he completes his tenure in Brussels.

IcetruckNovember 20, 2017
Like story:
tweet
Harrison Ford steps in to help woman whose car ran off the road
Endangered orcas compete with seals, sea lions for salmon