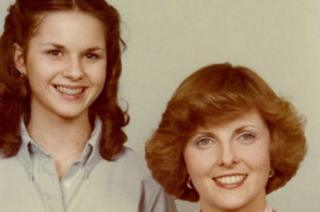 Senate candidate Roy Moore's accuser: I was a 14-year-old child

A woman who says Alabama Senate candidate Roy Moore abused her when she was a 14-year-old girl has described the alleged encounter.

Leigh Corfman told NBC News that Mr Moore, then a 32-year-old prosecutor, "seduced" her at his house in 1979.

Mr Moore, who denies the allegation, is currently lagging in opinion polls.

Most of the Republican establishment has lined up against the 70-year-old former Alabama supreme court judge and firebrand Christian conservative, whom they did not want elected in the first place.

Ms Corfman originally told the Washington Post how she was approached by Mr Moore outside a courthouse in Etowah County in 1979.

She had been sitting with her mother on a bench awaiting a child custody hearing in her parents' divorce case.

Her mother, the newspaper reported, was delighted when the assistant district attorney offered to sit with her daughter outside to spare her having to listen to the court proceedings.

In the coming days, Mr Moore allegedly picked up Ms Corfman around the corner from her home, and drove her to his house in the woods where he sexually assaulted her, the newspaper claims.

Ms Corfman told NBC's Today show: "Well I wouldn't exactly call it a date, I would call it a meet. At 14 I was not dating.

"At 14 I was not able to make those kinds of choices. I met him around the corner from my house, my mother did not know.

"And he took me to his home. After arriving at his home on the second occasion he basically laid out some blankets on the floor of his living room and proceeded to seduce me, I guess you would say."

She alleged that he removed her clothing and stripped to his white underwear before molesting her and trying to get her to touch him.

"At that point I pulled back and said that I was not comfortable and I got dressed and he took me home," Ms Corfman said.

The age of consent in Alabama is 16.

NBC host Savannah Guthrie pointed out that Mr Moore denies the allegations and says he does not know Ms Corfman.

A number of other women have accused Mr Moore of sexual misconduct when they were teenagers, including a former waitress who alleged he tried to rape her.

She replied: "I'm telling you that we want the votes in the Senate to get this tax bill through."

Underscoring the potential political fallout, Arizona Republican Jeff Flake, an outspoken critic of the US president, was overheard on a microphone telling a Republican mayor on Saturday: "If we become the party of Roy Moore and Donald Trump, we are toast."

The special election for the Alabama Senate seat is on 12 December.

According to a Gravis opinion poll survey published on Friday, Mr Moore was trailing Democrat Doug Jones, a 63-year-old US prosecutor, by 47% to 42%.

The last time an Alabama Democrat was elected to the US Senate was in 1979 – the year Ms Corfman alleges Mr Moore abused her.

Newspaper editorials in the Deep South state have been urging voters to reject the Republican candidate.

The editorial board of AL.com wrote on Sunday: "A vote for Roy Moore sends the worst kind of message to Alabamians struggling with abuse – 'if you ever do tell your story, Alabama won't believe you.'

"Or, worse, we'll believe you but we just won't care."