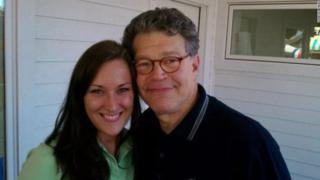 A second woman has accused Democratic Senator Al Franken of inappropriately touching her, alleging it happened during his time in office.

Lindsay Menz, 33, told CNN that Mr Franken "grabbed my butt" as they posed for a photo at the Minnesota State Fair in 2010.

In a statement, the ex-comedian said he did not remember the encounter, and he feels "badly" she felt disrespected.

He is already facing a possible Senate ethics inquiry over another allegation.

Last week, the former Saturday Night Live writer apologised after a woman accused him of sexual misconduct during a 2006 tour to entertain US troops overseas.

Leeann Tweeden claimed Mr Franken – who had not yet been elected to the US Senate – "forcibly" kissed her and took photographs of himself appearing to grope her breasts as she slept.

In August 2010, @alfranken grabbed me while taking a photo together at the Minnesota State Fair. I felt violated & embarassed. I 100% believe your account of him & his actions, @LeeannTweeden. Thank you for sharing your story. #metoo

The incident revealed on Monday was alleged to have happened almost two years after Mr Franken was elected to political office.

Mrs Menz met several politicians that day, she recalled, but as her husband prepared to take a photograph of her and Mr Franken, he "pulled me in really close, like awkward close, and as my husband took the picture, he put his hand full-fledged on my rear".

Her husband Jeremy said he did not see what Mr Franken did with his hands.

On Saturday a spokesperson for Mr Franken said the senator would not resign.

"He is spending time with his family in Washington, DC, and will be through the Thanksgiving holiday," the spokesperson told the Minneapolis Star Tribune.

She added the senator was "doing a lot of reflecting".

Also over the weekend, Mr Franken was ridiculed by his former employer, Saturday Night Live.

"Sure, this was taken before Franken ran for public office, but it was also taken after he was a sophomore in high school," joked co-host Colin Jost, describing the photo of Mr Franken seeming to grope a sleeping Ms Tweeden.

"It's pretty hard totouching or kissing several young women without their consent in a report published by Vox. be like, 'Oh, come on, he didn't know any better. He was only 55.'"

Meanwhile, another public figure has been accused of sexual impropriety.

A New York Times White House correspondent was suspended on Monday amid claims he harassed female colleagues while working at Politico.

Glenn Thrush, 50, was accused of touching or kissing several young women without their consent in a report published by Vox.

In a statement Mr Thrush wrote: "I apologize to any woman who felt uncomfortable in my presence, and for any situation where I behaved inappropriately."

The New York Times said it would "fully investigate" the claims.

IcetruckNovember 20, 2017
Like story:
tweet
President Trump’s charitable foundation is being shut down
WATCH: May 1, 1990: Health care in the US vs. health care in Canada