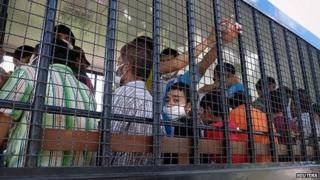 Uighur inmates dig their way out of Thai jail

Some 20 ethnic Uighurs from China are on the run after escaping from a Thai detention centre, officials say.

The inmates were among a group of more than 200 Uighurs detained in 2014.

Officials said 25 inmates dug holes in cell walls and used blankets to climb over the jail's barbed wire near the Malaysia border. Five have been caught.

Hundreds of Muslim Uighurs have left their home region of Xinjiang in recent years alleging oppression, which China denies. It calls them illegal migrants.

He said checkpoints had been set up along the border.

Many Uighurs flee to South-East Asia seeking to travel on to Turkey. There was an outcry when Thailand returned more than 100 Uighurs to China in July 2015.

Earlier that year a court in Thailand had ruled that a group of Uighurs could remain in detention until their nationalities were proven. Both China and Turkey claim them as their citizens.

Those who escaped on Monday had no documents and their nationality could not be determined, a Thai immigration official told Khaosod newspaper.

China's authorities blame Uighur separatists for instigating violence and the frequent unrest in Xinjiang. They have launched a widespread crackdown in Xinjiang, arresting hundreds and executing dozens in recent years.

Activists say that Uighurs have experienced economic, cultural and religious repression by the authorities over the decades, in addition to difficulties obtaining passports.

One theory for the deadly 2015 bombing of Bangkok's Erawan shrine is that it was carried out in revenge for the forcible repatriation of the Uighurs in July of that year.

Who are the Uighurs?