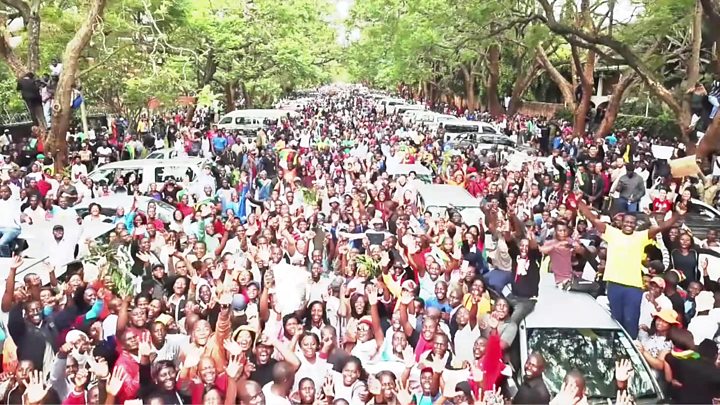 Zimbabwe's ruling Zanu-PF party has summoned its MPs to discuss the future of its leader, President Robert Mugabe, after a deadline for his resignation came and went on Monday.

The deadline was set by Mr Mugabe's own party, Zanu-PF.

The embattled leader surprised Zimbabweans on Sunday, declaring on TV that he planned to remain as president.

Zanu-PF says it backs impeachment, and proceedings could begin as soon as Tuesday when parliament meets.

In a draft motion, seen by Reuters, the party blamed the president for what it called an "unprecedented economic tailspin".

The public has poured on to the streets in protest in recent days, calling for the end of Mr Mugabe's 37-year presidency.

His grip on power has weakened considerably since the country's army intervened on Wednesday in a row over who should succeed him.

Zimbabwe has since then seen huge street rallies demanding his immediate resignation.

The protests have been backed by the influential war veterans – who fought in the conflict that led to independence from Britain in 1980.

The group's leader, Chris Mutsvangwa, on Monday called for more demonstrations against the president's attempt to cling on to power.

The city is swirling with rumours that Mr Mugabe is planning his resignation and that he may go back on television to announce it at any stage, and that Sunday's speech was simply about giving carte blanche to the military for what they've done.

But we just don't know at this stage if he will give in to the pressure from the war veterans, his own party, and the public.

Mr Mugabe said in his speech that he planned to preside over the Zanu-PF congress next month, a statement people here found baffling after the party voted to strip him of his leadership and kick out his wife.

What is clear is that everyone here believes that the Mugabe era is over. Saturday's protests unleashed something and people believe that a line has been crossed. Now it is really about negotiating the time, the process, the choreography of Mr Mugabe's departure.

The fear of Zanu-PF and of the security services will not go away overnight. People here grew up with that fear. In the meantime, the streets are calm, but Tuesday may bring more demonstrations.

Are you in Zimbabwe? What is your reaction to Robert Mugabe's refusal to resign despite calls from his party? Share your views and experiences by emailing [email protected]

IcetruckNovember 20, 2017
Like story:
tweet
Harrison Ford comes to the rescue after car accident
Argentina says calls did not come from missing submarine