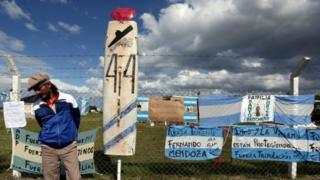 Argentina's navy says it will take advantage of improved weather conditions to further step up its search for a submarine that vanished last Wednesday in the Atlantic Ocean.

Strong winds and high waves have hampered the search for the ARA San Juan and its 44 crew in the past days.

On Monday, navy officials said that noises picked up by two search vessels did not come from the sub, dashing relatives' hopes for a speedy rescue.

It was the second false alarm.

A navy spokesman had earlier confirmed that satellite signals picked up on Saturday did not come from the missing boat.

On Monday, naval commander Gabriel Galeazzi confirmed the sub's captain had reported a breakdown on Wednesday describing it as a "short-circuit" in the sub's battery system.

No, there have been no sightings of the sub and no communication since Wednesday.

News of seven failed satellite calls made to naval bases on Saturday briefly raised hopes that they had come from the submarine.

But the signals were found not to have come from the satellite phone on board the ARA San Juan.

"Noise" picked up by sonar on Monday at sea was also found not to have come from the missing vessel.

The noise was described as "a continuous, constant sound" which did not resemble bangs on the sub's wall in Morse code.

"The sound footprint could not correspond to a sub… it may have been a noise from a living thing," Mr Balbi said.

How is the search going?

Submarines are built to be difficult to find and the search has been further hindered by bad weather.

The Argentine Navy tweeted a video showing the rough conditions at sea.

Waves of up to six metres in height (19.6ft) have made it difficult for search vessels and planes to spot anything on the sea's surface.

Brazil, Chile, Colombia, France, Germany, Peru, South Africa, Uruguay and the UK have all sent either ships or planes to help with the search.