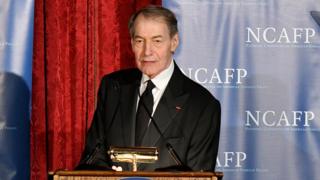 Eight women accused the veteran TV interviewer of inappropriate behaviour in a report by the Washington Post.

"These allegations are extremely disturbing and we take them very seriously," CBS News said. PBS and Bloomberg have also suspended him.

Mr Rose has apologised, but said not all the allegations were accurate.

They span from the 1990s to 2011 and include groping, lewd telephone calls and unwanted advances.

Two women who worked for Mr Rose said he walked naked in front of them, and another said she was groped by him at a party.

Mr Rose, 75, is one of America's most respected broadcasters.

He is known for conducting in-depth interviews, including with such high-profile guests as former President Barack Obama, talk show host Oprah Winfrey and billionaire Warren Buffett, on his eponymous television programme which first aired in 1991.

Mr Rose, whose show goes out on PBS and Bloomberg TV, also co-hosts CBS's This Morning and is a contributing correspondent for prestigious current affairs TV programme 60 Minutes.

His interviews have won him Emmy and Peabody awards, and he was named by Time magazine as one of its 100 most influential people in 2014.

My statement in full. pic.twitter.com/3kvFrqF2dT

PBS quickly suspended distribution of the Charlie Rose programme following the allegations, which they described as "deeply disturbing".

In a statement posted to Twitter, he said: "I deeply apologise for my inappropriate behavior. I am greatly embarrassed.

"I always felt that I was pursuing shared feelings, even though I now realize I was mistaken."

But he said that he did not believe "all of these allegations are accurate".

Numerous high-profile figures, including Oscar-winning actors and a Hollywood filmmaker, have been accused of sexual harassment in recent weeks.