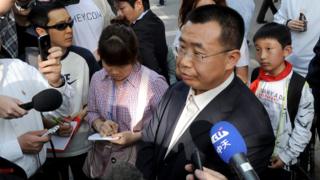 A prominent Chinese human rights lawyer has been jailed for two years, the latest conviction in Beijing's crackdown on rights activists.

His wife told Reuters that the verdict was unacceptable. Amnesty International dismissed the trial as a "sham".

Mr Jiang was an outspoken critic of the government's crackdown on dissenters, representing some of those rounded up.

It is estimated that more than 300 lawyers, legal assistants and activists have been questioned, and more than two dozen of these pursued as formal investigations.

The court also found the 46-year old guilty of using social media to attack the Chinese government and of inciting others to demonstrate in public.

His wife Jin Bianling told Reuters she believed her husband was being made an example to "deter or repress" other rights lawyers like him.

"I do not acknowledge or accept this verdict," she told the news agency speaking from the US.

She said his family had been unable to contact him since he first disappeared in November 2016 on a trip to visit the family of fellow rights lawyer Xie Yang who was held by the authorities at the time.

Mr Jiang was put on trial in August where according to state media he read out a confession, telling the court he attended overseas training sessions encouraging him to reject China's political system.

Human rights groups have described the trial as an effort to discredit the lawyer as a part of what critics describe as China's "war on law".