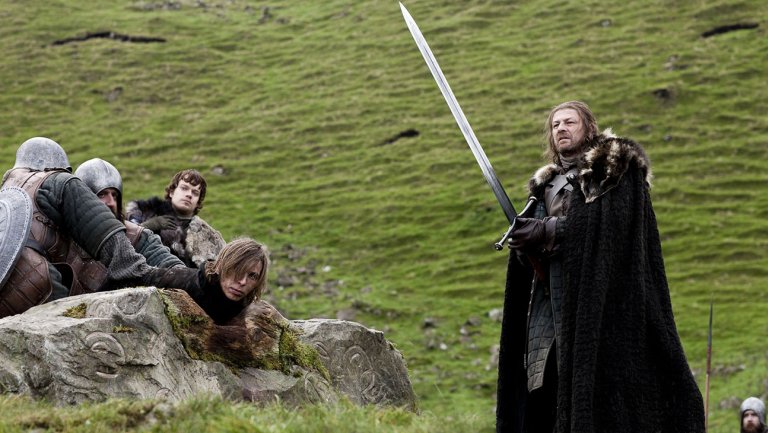 'Game of Thrones' Podcast: One Last Look at Season 1

This week's 'Winter Was Here' podcast features our final conversation about the first season of 'Thrones,' before our season two rewatch begins.

What would the world of Westeros look like with Eddard Stark (Sean Bean) still in place?

It's a question that's fresh on the mind following a rewatch of Game of Thrones' first season, in which the Lord of Winterfell and Warden of the North's final days on earth (or Planetos if you prefer) are front and center. How much bloodshed would have been averted if Joffrey (Jack Gleason) hadn't ordered Ned's head on a Valyrian platter? Would the War of the Five Kings have reached an earlier conclusion? Would Ned have found a way to install Jon Snow (Kit Harington) on the Iron Throne, due to his secret origin? With a level-headed leader in place, would the Seven Kingdoms be prepared for the coming arrival of the White Walkers?

Quite frankly, it's well-worn territory, at least as far as it concerns "Winter Was Here," the Game of Thrones rewatch podcast collaboration between The Hollywood Reporter and Post Show Recaps. Hosts Rob Cesternino and Josh Wigler (that's me!) have discussed the alternate timeline in which Ned Stark survives his trip to King's Landing ad nauseam. Here's what hasn't been discussed ad nauseam:

• What would Game of Thrones look like if Khal Drogo (Jason Momoa) was still alive?

• What about if Robert Baratheon (Mark Addy) wasn't murdered?

• How about if Bran Stark (Isaac Hempstead Wright) had died when Jaime Lannister (Nikolaj Coster-Waldau) pushed him out the window — what does the future of Game of Thrones look like without the Three-Eyed Raven in place?

One doesn't need greensight to ponder these possibilities. All one needs is a free hour to listen to our final thoughts on season one in the podcast below:

Ten episodes down. Fifty-seven still to go — and that's not even counting the final six episodes of the series that have yet to air. It's a daunting task, almost as fearsome as the one facing the men of the Night's Watch as they march beyond the Wall, or Arya Stark (Maisie Williams) as she sets out on the Kingsroad to face untold horrors, or Tyrion Lannister (Peter Dinklage) as he journeys to the capital of Westeros to serve as acting Hand of the King in the face of a coming war, or any other number of the hardships facing the cast of Game of Thrones as they exit the first season of the show.

We take on the task gladly. Onward to season two, beginning next week.