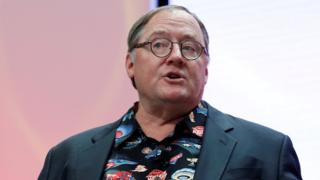 John Lasseter, the head of animation at Pixar and Disney, is taking a leave of absence after allegations of misconduct emerged about him.

Other sources alleged he was known for "grabbing, kissing, making comments".

In a statement Mr Lasseter apologised "to anyone who has ever been on the receiving end of an unwanted hug".

He apologised for his "missteps" and "any other gesture they felt crossed the line in any way, shape, or form".

"Collectively, you mean the world to me, and I deeply apologize if I have let you down," he said.

"No matter how benign my intent, everyone has the right to set their own boundaries and have them respected."

Mr Lasseter, a founding member of Pixar, said he would be taking a six-month leave of absence to "start taking better care of myself".

The chief creative officer at both Pixar and Walt Disney animation studios, he is one of the driving forces in the industry and has been behind some of the most successful children's films in the last two decades.

He was the director of Toy Story, A Bug's Life, and Cars; and has producer credits on dozens of major films including Finding Nemo, Wall-E, Up, and Frozen.

Disney, in a statement quoted by Reuters news agency, said it appreciated his "candor and sincere apology" and supported his decision to take a leave of absence.

Pixar's latest movie, Coco – on which Mr Lasseter is credited as an executive producer – releases on 22 November in the United States, hours after his leave of absence was announced.

The fantasy adventure film is scheduled for release in UK theatres in January.