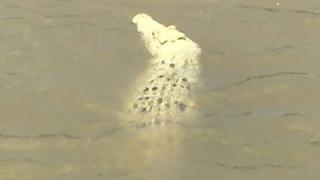 An uncommon sighting of a mature white crocodile has excited tourism operators in Australia's Northern Territory.

The reptile, nicknamed Pearl, was spotted on the Adelaide River near Darwin on Sunday.

One witness, a local conservation enthusiast, estimated the crocodile was about 3m (10ft) long.

The reptile's pale appearance is caused by hypomelanism – having a low amount of the pigment melanin, according to a zoological expert.

Locals believe the animal may be related to a well-known hypomelanistic crocodile that was put down after killing a fisherman in 2014.

"Everyone is so ecstatic," said the president of an unofficial local conservation group, who gave her name only as Broady.

"I spent most of the day in tears watching her."

Why is the crocodile white?

Most crocodiles in Australia range from grey to green in colour, a key part of their camouflage.

However, Pearl's hypomelanism probably occurred through genetics or during incubation, said Adam Britton, a research associate at Charles Darwin University.

"During incubation, if the eggs in the nest get a little bit too hot, it can lead to errors in cell division and cause mutations," Mr Britton said.

He said that could include "a colour mutation or a different pattern of scales on the skin".

Such crocodiles are "not uncommon" at a young age, particularly in crocodile farms, according to Mr Britton.

However, it is difficult for a pale juvenile to steer clear of predators.

"It's a little bit more unusual to see an adult crocodile with that lighter colouration," Mr Britton said.

"I've seen crocodiles like this every now and then, but not as big in the wild."