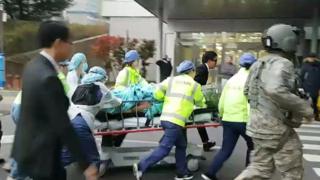 North Korea defector wakes after being shot crossing the DMZ

A North Korean soldier who was shot at least five times while defecting to the South has regained consciousness.

"We believe the most life-threatening moment has now passed," a government official told the agency.

The soldier made his escape over the demilitarised border last week and was shot at more than 40 times before reaching safety, the South says.

Medical staff say that he is traumatised from his ordeal.

"To provide psychological stability a South Korean flag has been placed hanging on the hospital room wall," the government official told Yonhap.

The identity of the soldier, who had been in a critical condition, has not yet been announced.

He crossed to the South Korean side of the Joint Security Area (JSA) in the village of Panmunjom on 13 November.

He had to finish his journey on foot when a wheel on his vehicle came loose – but he made it across and was found under a pile of leaves, the South said.

On Friday, it emerged he had an infestation of worms in his body, contaminating his wounds and making his situation worse. His condition was said to give a rare insight into life in North Korea.

About 1,000 people from the North flee to the South each year – but very few defect via the Demilitarised Zone (DMZ), which is one of the world's most heavily guarded strips of land.

It is even more unusual for North Koreans to cross at the JSA, which is a tourist attraction, and the only portion of the DMZ where both forces stand face-to-face.

The majority of the defectors flee via China, which has the longest border with North Korea and is easier to cross than the heavily protected DMZ.

China though regards the defectors as illegal migrants rather than refugees and often forcibly repatriates them.