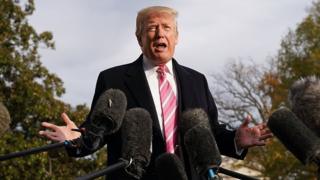 US President Donald Trump has backed a beleaguered Alabama Senate candidate who is accused of preying on teenagers.

He pointed out that Roy Moore "totally denies" sexual misconduct with a string of teenage girls, including a 14-year-old, when he was in his 30s.

"We don't need a liberal person in there, a Democrat," Mr Trump said of next month's election.

Senate candidate's accuser: I was a child

On Tuesday, Mr Trump also assailed Mr Moore's Democratic rival Doug Jones, who is currently ahead in opinion polls by 47% to 42%.

"I've looked at his record, he's terrible on the border," Mr Trump said as he left the White House for a five-day holiday in Florida.

He also voiced support for the scores of women who have felt emboldened to level sexual misconduct allegations since last month's downfall of Hollywood producer Harvey Weinstein.

The Republican president's legislative agenda could be imperilled if Mr Moore is beaten on 12 December – Republicans only hold a slim 52-48 majority in Senate.

Yet a number of Senate Republicans, including majority leader Mitch McConnell, have called on Mr Moore to quit the race.

The 70-year-old former Alabama supreme court judge and firebrand Christian conservative has refused to stand aside.

Seven women have accused Mr Moore of pursuing sexual relationships with them when they were teenagers and he was a 30-something prosecutor.

Two of them allege he assaulted them.

Two other women who were in their 20s at the time accuse him of making unwanted advances.

He denies the allegations.

After having been burned by backing the establishment-endorsed candidate in the Alabama Senate primary over Roy Moore, Donald Trump isn't making the same "mistake" twice.

His loyal supporters in Alabama largely continue to stand by the former judge, despite multiple allegations of sexual misconduct – and so does the president.

Mr Trump signalled his implied preference for Mr Moore by condemning the Democrat, whom he says is soft on crime and immigration.

It mirrors White House adviser Kellyanne Conway's warning of the dangers of electing a liberal to an important political office.

It's a rationale not unlike the one used by some uneasy Republicans last year to justify voting for Mr Trump following the Access Hollywood tape revelations and allegations that he had harassed or assaulted more than a dozen women.

Yes, Mr Trump's behaviour was inappropriate, but electing Hillary Clinton as president would be much, much worse.

Democrats face a similar dilemma with Senator Al Franken's admitted misdeeds. At what point must one put aside party loyalty and conclude that some alleged actions – and actors – cannot be condoned?

For Mr Trump, who notes that Mr Moore has repeatedly denied the allegations, the line has not yet been crossed.