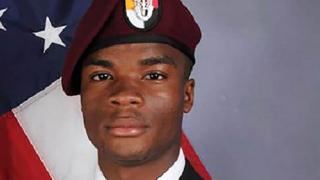 Further remains have been recovered of a US soldier killed last month in the West African nation of Niger, the US defence department says.

A military investigation team made the discovery on 12 November at the site where Army Sgt La David Johnson's body was found, US officials said.

The Armed Forces Medical Examiner positively identified the remains as those of 25-year-old Sgt Johnson.

Sgt Johnson was among four US soldiers killed by about 50 Islamist militants.

How did US soldiers die in Niger?

Soldier's widow: Trump made me cry

The Pentagon did not specify on Tuesday what additional remains had been recovered.

"We extend our deepest condolences to all of the families of the fallen," it said in a statement.

She said their refusal made her suspicious about the contents of the closed coffin.

"They won't show me a finger, a hand," she had told the network.

"I know my husband's body from head to toe, and they won't let me see anything.

Bodies of the other three soldiers were discovered on the same day they were attacked in the village of Tongo Tongo on 4 October.

Two villagers who found Sgt Johnson said his body had a gaping head wound and his hands had been bound.

"His two arms were tied behind his back," Adamou Boubacar, a farmer, told the Washington Post earlier this month.

Another witness told the newspaper the back of Sgt Johnson's head "was a mess, as if they had hit him with something hard, like a hammer".

The Pentagon is investigating his death, together with those of staff sergeants Bryan Black, Jeremiah Johnson and Dustin Wright.

Questions have been raised as to why it took hours before back-up support reached the patrol.

His death was politicised when President Donald Trump erroneously said his predecessors had neglected to make condolence calls to the families of fallen US soldiers.

Mr Trump was later accused of being insensitive during a phone call with Sgt Johnson's widow, which he denied.