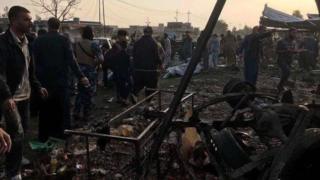 At least 23 people have been killed and 60 others wounded in a suicide car bomb attack in Iraq, security sources say.

The blast ripped through a crowded fruit and vegetable market in the centre Tuz Khurmatu, about 160km (100 miles) north of Baghdad.

The sources said the number of dead was likely to rise because many of the wounded were in a critical condition.

No group said it was behind the attack, but it bore the hallmarks of previous bombings by so-called Islamic State.

Iraqi Prime Minister Haider al-Abadi said on Tuesday afternoon that he was on the verge of declaring a final military victory over the Sunni jihadist group, after pro-government forces retook the last town under its control last week.

But he warned political disagreements would allow IS to continue to launch attacks.

Tuz Khurmatu, which has a mixed ethnic Kurdish, Arab and Turkmen population, was the scene of deadly clashes last month when Iraqi pro-government forces retook it from Kurdish Peshmerga fighters.

Mr Abadi ordered the military to capture disputed territory controlled by the Kurds since 2014 – when IS swept across northern Iraq – after the autonomous Kurdistan Region held a referendum on independence at the end of September.

Turkmen MP Niazi Maamar Oglu said Tuz Khurmatu had not seen an attack as deadly as Tuesday's "for years".

Salahuddin province security chief Mehdi Taqi told AFP news agency: "There are still some areas west of Tuz Khurmatu that serve as hideouts for IS and we will soon be carrying out operations to clean them up."