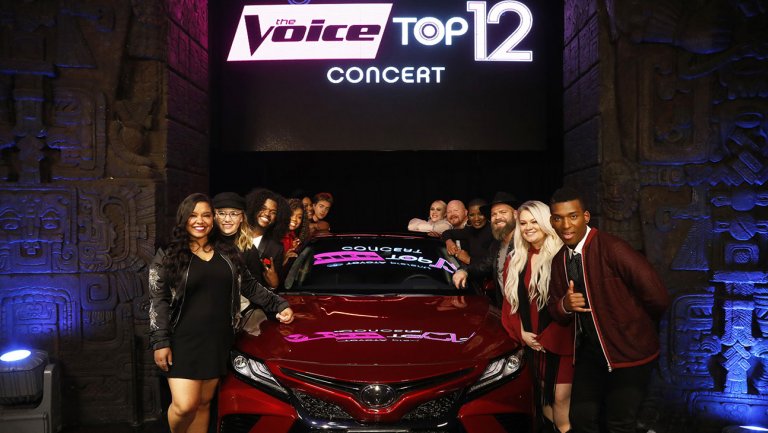 Blake Shelton threw his boot on stage for the final performance of the night.

Season 13 of The Voice went live for the first time tonight, with the top 12 artists singing for America’s vote. Coaches Blake Shelton, Adam Levine, Jennifer Hudson and Miley Cyrus each picked three artists to advance to this round last week. The coaches were on hand to give feedback and help get their artists ready for the high-stakes live performances.

Team Miley’s powerhouse singer Brooke Simpson got the lives started with an emotional performance of “Praying” by Kesha. Simpson talked about her sound in rehearsal, referring to herself as a pop-soul artist. She dedicated the song to America, which was a good move to connect with viewers at home. The song starts low, but she sounded great on those low parts. She hit the notes in her upper register, too, showcasing her range. She got a standing ovation from all four coaches. “You show what this show is about,” Hudson said.

Team Blake’s Red Marlow opted to lean on his bluegrass roots this week with a performance of “The Church On Cumberland Road” by Shenandoah. He dedicated the performance to his father. It was definitely in his wheelhouse, and his performance will likely connect with classic country fans who represent a good portion of The Voice viewers. Levine called is authentic, amazing, powerful and strong. Shelton said it was the first time he really saw Marlow’s performance side.

Team Hudson’s 15-year-old Shi’Ann Jones sang “Vision Of Love” by Mariah Carey and even brought out some Mariah-esque whistle notes for it. She dedicated the song to her coach, saying that Hudson has helped get her out of her shell. She sang the hit well, and her range was impressive. Hudson was the only coach who turned for Jones in the Blind Auditions, so she saw something special. Shelton expressed regret over not turning.

Jon Mero from Team Adam sang “Why I Love You” by Major. Making his coach proud, he emphasized his falsetto in the arrangement. As Levine noted in rehearsal, he successfully made the song his own. “You have just created such a fan base,” Cyrus said, calling it a perfect performance. He got a shoe from Hudson.

Team Miley’s Ashland Craft got her country on with “Delta Dawn” by Tanya Tucker. Cyrus is coming for Shelton’s country title on this show. It was a fun performance that was well within Craft’s wheelhouse. Hudson affirmed that Craft has star potential. “Nothing less than this, honey,” Cyrus said, telling Craft she has set the bar for herself.

Team Adam’s Adam Cunningham was up next, dedicating his performance of “Against All Odds” by Phil Collins to his family. Levine intentionally encouraged Cunningham to sing a song outside of his repertoire, giving him a chance to blend his country sound with his rock sound. Levine’s song choice was great for Cunningham, making him seem like a more versatile artist. He made it his own and stood out. He made a slight vocal mistake at the beginning, but he recovered well, and Levine respected him for pulling through it.

Team Blake’s Chloe Kohanski, who had the highest charting song from the Knockouts in the history of The Voice, sang “Thank You” by Dido. She dedicated the song to her biggest fan, her boyfriend. It sounded a little too close to the original, but it was a strong performance. She definitely stands out on Team Blake, and she has great artistry. Shelton said she had the most well rounded voice he has ever heard on the competition, and Cyrus said she wished she had her on her team.

Team JHud was back up with a performance from Davon Fleming of “Love On Top” Beyoncé, which he dedicated to his city of Baltimore. His voice sounded gorgeous on the song. He has one of the most beautiful tones in the competition, and the song showed it off perfectly. Levine was left speechless, and he ended up throwing his shoe on stage. Hudson had also thrown hers. “You represented your own artistry,” Hudson said, adding that he took it to a whole new level.

Addison Agen, Team Adam’s young indie singer, chose to sing “She Used To Be Mine” by Sara Bareilles. She dedicated the performance to her mom, and Levine encouraged her to add some dynamics to the arrangement. It started very strong and remained consistently impressive throughout. She proved experience beyond her years and tapped into the song’s emotional core, all well delivering an original vocal. “You’re a person who can be an inspiration to so many young woman,” Levine said. T

eam Blake’s Keisha Renee sang “Midnight Train to Georgia,” bringing her many years of professional experience to the performance. Renee is a strong and seasoned country artist who can sing just about anything. Hudson said she’s headed for the top. Shelton was blown away by the performance.

Noah Mac from Team JHud was up next, singing “Speed Of Sound” by Coldplay, coming up with his own original arrangement, which was impressive. He showcased great artistry, dedicating his performance to other singers working to achieve their dreams like he is. It was his strongest performance to date. “You are a star. You are it,” Hudson said.

The last artist of the night was Team Miley’s Janice Freeman, who sang “The Story” by Brandi Carlile. She dedicated the performance to her husband. It was a great song choice that highlighted her strengths and allowed her to deliver a really strong pop-rock vocal. The night started the same way it began: with another standing ovation from all four coaches. Hudson and Shelton threw their shoes. It was the first time Shelton had thrown a boot on stage, so Freeman definitely left an impression on the coaches and viewers alike.