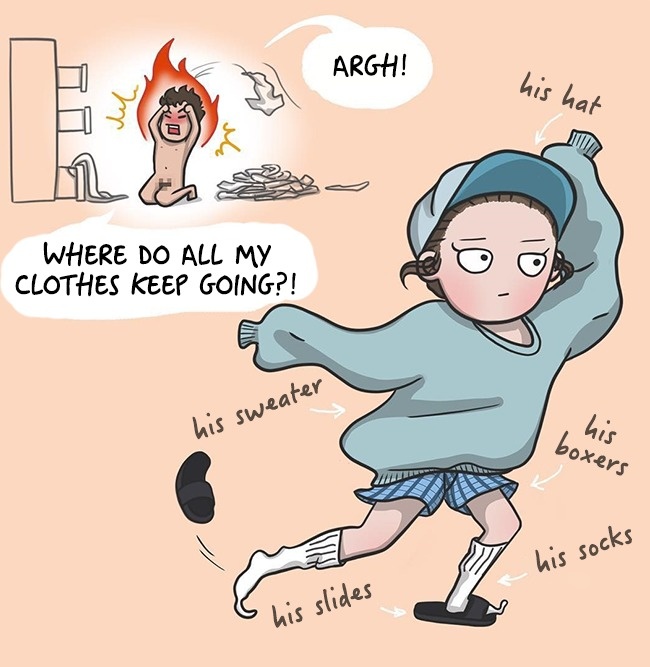 There is a female artist from Los Angeles and her name is Mary Park, also known as Murrz. She is an artist and graphic designer by profession. Basically, she creates hilarious yet realistic comics about girls who can be probably linked. Here are some comics that you girls would for sure relate to.

17. When you wear your boyfriend’s clothes :

Did you ever wake up in the morning and said, “I have nothing to wear?”, and then go to your boyfriend’s closet and wear his clothes. Maybe because you find his hoodies, socks, shorts or shirts more comfortable and roomier. It can be that you are addicted to the smell of it. And on the other side, your boyfriend would be yelling at you for wearing his clothes. You would definitely relate this to you or to your other friends.

16. When girls find themselves strong and independent:

Every girl would have experienced this in her life. First, they show that they are strong and independent enough that they don’t need anyone’s help. And after doing a manly work, they start crying and shouting in front of her boyfriend and saying that you would have helped me in doing that work. If you actually compare this with you, do tell us in comments!

15. Jealous of your boyfriend’s lashes:

“WHY BOYS ARE BLESSED WITH LONG EYELASHES THAT THEY DON’T DESERVE OR THEY DON’T NEED”. Every girl out there would have thought about this once in her life. The girls in relationship would have experienced their boyfriend’s showing off their long, pretty lashes to them. Jealous much? Then do tell us in the comments!

A normal diet plan would be difficult for a girl to follow. So, there is a special diet plan that every girl follows. She starts her day with black coffee in the morning and then eats a half sandwich and soup, eating salad in the evening with sad mood. To switch that sad mood into exciting mood, she eats all the chocolates at night to fulfill those cravings.

13. Before and after in a relationship:

Let’s think for a second. Every girl out there loves her cat more than her boyfriend, true or not? I think it’s true. Girls are more addicted to their cats. She can tolerate ignorance by her boyfriend but she cannot tolerate an ignorant attitude of her cat. That makes her sad. If you think it’s true, do write it in comments.

11 Skills That Are Hard To Learn But Will Pay Off Forever 11. Treating your cat like a baby:

As I have said it before, that girls love their cats more than her boyfriend. They treat them like a baby. I think it’s because cats have feminine qualities and they seem like independent and finicky and that attracts the most to the girls. If you believe this, do let us know!

10. Girls have problem that they do not have any problem:

Girls are so sensitive and emotional by nature that they would cry over little things. Some reasons would make sense but half of them make none. A girl can cry on this reason as well that other girls look pretty while crying whereas I look ugly while crying. Let us know, what you think of it?

There are two types of girls. Normal girl uses public washrooms in neat and clean way and there is another type of girls who make public washrooms dirty and then don’t flush the toilet with hands considering them dirty. What do you think of it, do let us know in comments.

8. Girls think of themselves as singer:

Every girl while driving a car would close her windows and start singing. They think that nobody is watching them. Once she’s done with singing, she will start observing around. But the reality is people do stare at you! Every single girl can relate this comic to her. If yes, then do tell us know!

It’s a kind of stereotype that a man is attracted towards that woman who can cook good food and every girl considers herself as a master-chef. They think that nobody can cook like them. But sometimes, the food they cook tastes really well but sometimes it turns out to be a disaster. True or not? Do comment!

6. When they both are having quality time:

5. Girls in real life vs on social media:

Girls on instagram are totally different from real life. Maybe because they want to be famous in their social circle or to get likes! She is like “This club could not have been more boring” in real life and then the same girl on instagram be like “Posting pictures from NY Fashion week! If you relate this with someone, do share with us.

4. Spending all of her money on food:

Every girl would relate this with her. A girl would rather spend all her money on food but would never spend on the things she needs. They do decide to think about shopping those needy things but always end up buying food. Related much? Do tell us in the comments.

Periods are the only thing that stops a girl from achieving her goals. It makes a girl lazier and in low mood state. You just don’t want to get up from your bed and change clothes. This comic describe these days quite good.

This is every single girl’s problem. Isn’t it? You are pretty fine just before one day of your periods and the other day, you are having periods. You feel ugly, fat and depressed! You just want to hide from the world. If you feel the same, do tell us.

Girls face mood swings more often. Once she thinks that she is getting old and she’s not married yet. The other moment she’s like, I am still a baby. These moods change in seconds. If you think, it’s true. Do comment!

10 Celebrities Reveal Their First Job Before They Were Famous

The post This Artist Hilariously Explains The Problems All Girls Go Through appeared first on Born Realist.

IcetruckNovember 21, 2017
Like story:
tweet
New ‘Star Wars’ clip teases ‘something else’ besides light and dark
Here Are 10 Popular Cities That Can Be Unsafe for Tourists