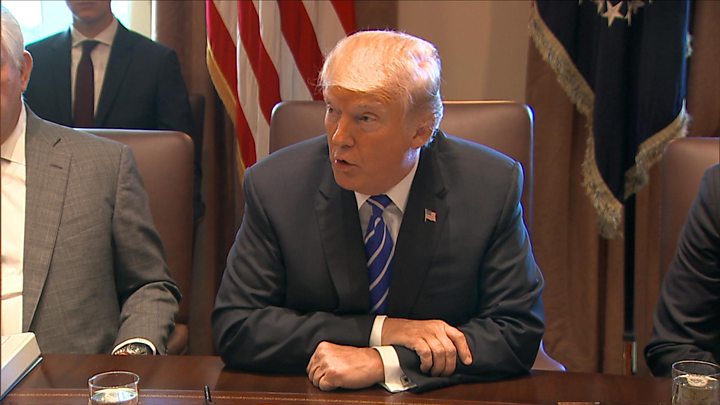 President Trump has announced that the US is re-designating North Korea a state sponsor of terrorism, nine years after it was removed from the list.

In a cabinet meeting, he said the move would trigger "very large" additional sanctions to be announced on Tuesday.

But Secretary of State Rex Tillerson later admitted that "the practical effects may be limited".

Mr Trump blamed the country's nuclear programme, and support for what he called international acts of terrorism.

While announcing the decision at the White House, the US president said it "should have happened a long time ago".

In September, the US proposed a range of United Nations sanctions against North Korea, including an oil ban and a freeze on leader Kim Jong-un's assets.

North Korea joins Iran, Sudan and Syria on a list of countries that are deemed to have repeatedly provided support for acts of international terrorism.

The country has been on the list before but was removed in 2008 by the administration of George W Bush as part of negotiations on the North's nuclear programme.

The campaign to reinstate it intensified after the American college student Otto Warmbier died shortly after he was released from North Korean custody.

Secretary Tillerson hasn't given up on a negotiated solution to the stand-off with North Korea.

He told journalists he still hoped for diplomacy. But the decision to put Pyongyang back on the list of state sponsors of terrorism will almost certainly set back the possibility of any opening for talks, at least in the short term.

The chances of that happening were slim anyway. And it might prompt a backlash from North Korea, perhaps by way of another missile test.

The Americans have had some success in getting other countries to tighten the noose on Pyongyang, including from China.

Mr Tillerson's goal remains to eventually force the regime to back down and agree to negotiations aimed at giving up its nuclear weapons programme, something Pyongyang has refused to do.

China on the other hand, is pushing for talks now, alongside the pressure. It won't be happy about anything that makes that less likely

Speaking to reporters at a White House press briefing, Mr Tillerson, the top US diplomat, said the designation was meant to hold North Korea accountable for recent actions it has taken "including assassinations outside of their country" and "using banned chemical weapons".

He admitted that given existing sanctions it was "very symbolic" but also said new measures could "disrupt and dissuade some third parties from undertaking certain activities with North Korea".

"The practical effects may be limited but hopefully we're closing off a few loopholes with this," he said.

He has made no secret of Pyongyang's plans to develop a missile capable of reaching the US mainland and has claimed to have developed a hydrogen bomb.

Last month, US Defence Secretary James Mattis said that the threat of nuclear attack from North Korea was increasing.

Monday's announcement comes after the president returned from an extensive tour of Asia last week.