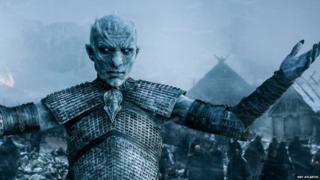 US moves to block AT&T's takeover of Time Warner

The US Department of Justice has filed a lawsuit to block telecoms giant AT&T's acquisition of Time Warner, the owner of CNN and HBO.

The department said the merger would reduce competition and lead to higher consumer prices.

AT&T vowed to fight the move, calling it a radical departure from US competition practice.

US President Donald Trump objected to the deal during his campaign last year, fuelling the controversy.

AT&T chief executive Randall Stephenson said he thought the acquisition had been on a good path "until recently".

He referred to concerns about possible political influence as the "elephant in the room". President Trump is a vocal critic of CNN which is owned by Time Warner.

Mr Stephenson said: "There's been a lot of reporting and speculation whether this is all about CNN. And frankly I don't know. Nobody should be surprised the question keeps coming up."

In its lawsuit, the Department of Justice claimed that the deal – valued at more than $85bn when it was announced last year – would harm American consumers.

Assistant attorney general Makan Delrahim of the Department of Justice's antitrust division, said: "It would mean higher monthly television bills and fewer of the new, emerging innovative options that consumers are beginning to enjoy."

Of the 24 firms that were part of the nationwide landline telephone network Bell System, ten are a part of the current AT&T. The firm has also been on a buying spree in the past two decades.

Mr Delrahim said the combination would hurt the emergence of new online television options and give AT&T the power to force rival pay TV companies to pay "hundreds of millions of dollars more" for Time Warner content.

The decision to take legal action sets up a high-profile fight over US anti-trust law, which has rarely been tested in cases involving companies that do not directly compete.

George Hay, a professor of law and economics at Cornell, said there was "no question" the merger's potential competitive impact merited serious review.

"There would be nothing unusual if you didn't have all of this political background," he said.

During his presidential campaign last October, Mr Trump said that the deal would not be approved "in my administration because it's too much concentration of power in the hands of too few".

But challenges of vertical mergers – when firms operating at different levels within an industry's supply chain combine – have been rare, since at least one of the parties involved must have a major market position to raise concerns, Professor Hay said.

In the past, competition officials have also been open to settlements in such cases, assuming the deals will create efficiencies that could benefit the consumer. In those cases, companies can merge but face restrictions on their behaviour.

That happened in 2011, when the department allowed a merger between Comcast and NBCUniversal.

Last year, Mr Delrahim said he did not see major issues with the merger.

But he has also criticised so-called behavioural remedies used in the past to keep anti-competitive activity in check, saying they are overly intrusive and hard to enforce.

The company's general counsel, David McAtee, said: "Vertical mergers like this one are routinely approved because they benefit consumers without removing any competitor from the market. We see no legitimate reason for our merger to be treated differently."

AT&T also denied that the deal would lead to higher charges and said it had been willing to negotiate.

Previously, US media reported that the Department of Justice was pushing AT&T to sell some of its assets as a condition for approval. The options included Turner Broadcasting or its satellite network.

Mr Stephenson has said he is unwilling to sell CNN, which is part of Turner.

Professor Hay said it was not clear how the case would fare in court and it could still get resolved with a settlement.

He said it was surprising that the challenge was coming under a Republican administration, since Republicans and their appointees have historically been more business friendly.

But he was "sceptical" the decision to bring the case would turn out to be entirely political, given how much Department of Justice staff prize their independence. If it were, he said, it would harm the department's case.