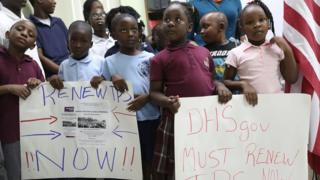 The US is to terminate a programme that gives more than 50,000 immigrants from Haiti protection against deportation.

Immigrants from the Caribbean nation received protected status in 2010 after a devastating earthquake.

But the Trump administration says conditions there have now improved and its nationals can return safely.

It says their protected status will end in July 2019, giving Haitians 18 months to return or otherwise legalise their immigration status in the US.

"Those extraordinary but temporary conditions caused by the 2010 earthquake no longer exist," a statement from the US Department of Homeland Security said.

"Significant steps have been taken to improve the stability and quality of life for Haitian citizens, and Haiti is able to safely receive traditional levels of returned citizens," the statement added.

But campaigners say the Trump administration has unfairly singled out small numbers of the most vulnerable people as part of its tougher stance on immigration.

In a statement, House Democrat Leader Nancy Pelosi said: "Deporting tens of thousands of men and women back into the nation will only deepen the suffering in Haiti."

"I completely disagree with the characterization that the situation in Haiti has improved", she added.

The move to terminate TPS for Haitians comes after a similar step was taken against 5,000 Nicaraguans. Protection for 86,000 Hondurans in the US has been extended.

A decision on El Salvador's status, which was given TPS after its 2001 earthquake, is due in January.