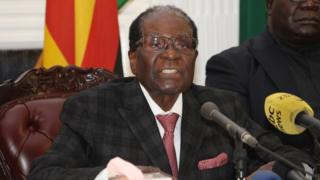 Emmerson Mnangagwa said he fled abroad two weeks ago when he learned of a plot to kill him, and he would not return until he was sure of his security.

Parliament has now begun a session in which the ruling Zanu-PF party is to start impeaching the president.

Mr Mugabe is accused of allowing his wife to "usurp constitutional power".

Speaking from an undisclosed location on Tuesday, Mr Mnangagwa said the 93-year-old president should heed the "clarion call" of his people and step down.

"I told the President that I would not return home now until I am satisfied of my personal security, because of the manner and treatment given to me upon being fired," he said in a statement.

In a bid to resolve the crisis, South African President Jacob Zuma and his Angolan counterpart João Lourenço will travel to Zimbabwe on Wednesday on behalf of southern Africa's regional body, Sadc, the grouping said.

Emmerson Mnangagwa more or less accused President Mugabe of trying to have him killed. The statement from the former vice-president gave an extraordinary insight into the vicious power struggles that preceded last week's military intervention here.

Mr Mnangagwa said his security guards had warned him of plans to "eliminate" him, after he was sacked earlier this month. He promptly fled to South Africa.

On Monday night, Zimbabwe's army generals claimed that Mr Mnangagwa had agreed to return home as part of a transitional roadmap.

That roadmap now sounds like wishful thinking, as parliament here prepares to impeach the president, and Mr Mnangagwa angrily demands that his former boss respects the will of the people or face humiliation.

Why is Mugabe so unpopular?

The president has been in power since independence in 1980. He has won elections, but over the past 15 years these have been marred by violence against political opponents.

Above all, Mr Mugabe has presided over a deepening economic crisis. Zimbabweans are on average 15% poorer now than they were in 1980.

What triggered moves to oust him was Mr Mnangagwa's dismissal as vice-president two weeks ago. The move was seen by many as clearing the way for Mr Mugabe's wife Grace to succeed her husband as leader.

The move riled top soldiers, who stepped in and put Mr Mugabe under house arrest. However he remains president, and in recent days has defied calls from his own party and from protesters to stand down.

In a further sign of his dwindling authority, only a handful of his ministers turned up for a cabinet meeting on Tuesday.

What is he accused of?

Zimbabwe's constitution lists "serious misconduct", "violation" of the constitution or "failure to obey, uphold or defend" it, or "incapacity", as grounds for impeachment.

On Monday, Zanu-PF member of parliament Paul Mangwana said: "The main charge is that he has allowed his wife to usurp constitutional power when she has no right to run government.

"He has refused to implement the constitution of Zimbabwe – particularly we had elections for the provincial councils, but up to now they have not been put into office."

How would the impeachment process unfold?

It would start with a motion, to be presented as early as Tuesday afternoon, laying out the charges against Mr Mugabe and his wife.

If – as is likely – the motion is approved by a 50% majority in a joint sitting of the National Assembly and the Senate, a committee from both chambers will be appointed to investigate.

Should the committee support the charges, the president can then be removed if both houses back them with two-thirds majorities.

Paul Mangwana said the process could be fast-tracked and completed by Wednesday, "because the charges are so clear". But others insist the process should take longer.

Tendai Biti, a leader of the opposition MDC, insists the constitution allows for a fair hearing. "Mugabe as the accused person will obviously be entitled to legal representation," Mr Biti told the BBC.

The full process, he added, could take between one and three weeks. If the impeachment is fast-tracked, he said, "the process will not be legitimate or credible".

What happens if Mugabe is removed?

He will be succeeded by the vice-president.

The military would like to see Mr Mnangagwa step into that role. But it is current Vice-President Phelekezela Mphoko, a supporter of Grace Mugabe, who would in theory assume the post.

It is not clear if Mr Mnangagwa could be restored to his former position.

IcetruckNovember 21, 2017
Like story:
tweet
McDonald’s to raze Chicago-area museum of 1st restaurant
Trump and Putin speak by phone about Syria, other hot spots