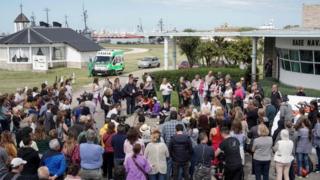 Argentina has accepted help from Russia in the search for a military submarine that went missing with 44 crew in the southern Atlantic a week ago.

President Mauricio Macri said the Russian leader, Vladimir Putin, had phoned him to offer to deploy a survey vessel and crew with experience of similar operations.

More than a dozen countries, including the US, are taking part in the search.

The ARA San Juan vanished after it reported an electric breakdown.

It last made contact with naval officers on land last Wednesday.

A navy spokesman, Captain Enrique Balbi, said the search had now entered "a critical phase," amid fears that oxygen supplies may be running low.

He later told Argentine journalists that the Navy was investigating reports of a loud noise detected in the area a few hours after the ARA San Juan went missing.

He described it as a "hydro-acoustic anomaly" and refused to confirm whether there had been an explosion.

The whole country has been following the news closely, hoping that the sub is located before it runs out of oxygen.

On Monday, Capt Galeazzi confirmed the sub's captain had reported a breakdown on Wednesday describing it as a "short-circuit" in the sub's battery system.