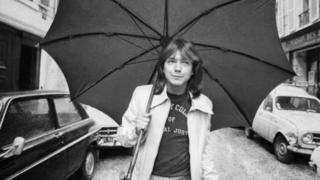 US actor and singer David Cassidy, who found fame in The Partridge Family before going on to become a 1970s teen pop idol, has died aged 67.

"David died surrounded by those he loved, with joy in his heart and free from the pain that had gripped him for so long," a family statement said.

He was admitted to hospital last week after suffering multiple organ failure.

Earlier this year the singer said he had dementia and would stop touring in order to "enjoy life".

Cassidy was born in New York to a family familiar with the entertainment industry. His father was a singer and actor and his mother was an actress.

He became a star playing Keith Partridge in The Partridge Family – a 1970s sitcom about a mother and five children who formed a rock and roll band.

The show spawned several hit songs, such as I Think I Love You.

Following the sitcom he enjoyed a hugely successful career in music and acting. He received multiple Grammy nominations and sold more than 30 million records worldwide.

At the peak of his fame in the 1970s, his fan club reportedly had a bigger membership than that of The Beatles and Elvis Presley combined.

Hundreds were injured in a stampede at a London concert in 1974, with a girl dying a few days later. It was an event he said would "haunt" him for the rest of his life.

In recent years he has spoken about his struggle with alcohol.

He has divorced three times and has two children.

Speaking to BBC Radio 4's Today programme, Leo Sayer, who toured with Cassidy in 2012, said he was "the perfect popstar".

"His fans were so dedicated and loyal, he was a sweetheart and so non-threatening.

"He was so important to the music industry, the love that people have for him – he was like Donny Osmond but better," Sayer said.

Those sentiments were shared by self-proclaimed superfan Allison Pearson, who has written a book about Cassidy's life – called I Think I Love You.

She told Today, "There will be tears in millions of women's eyes today, he was the perfect first love. He had a weird life where he was a demi-god at 21.

"I spoke to him one day and said 'many years from now we will hear you've died and it will be an incredibly poignant time for women' and he said 'a small part of you will die with me', and I said 'yes it will'."

Tributes to Cassidy have also been widely shared on social media. His nephew, Jack Cassidy, said the star brought joy "to countless millions of people".

My uncle David Cassidy has sadly passed away tonight… & in the process of mourning I can't help but thank God for the joy that he brought to countless millions of people! I don't think I'm alone in saying that we will all miss him. God Speed!

The Beach Boys' Brian Wilson remembered writing a song with Cassidy, who he described as "very talented".

I’m very sad to hear about David Cassidy. There were times in the mid-1970s when he would come over to my house and we even started writing a song together. He was a very talented and nice person. Love & Mercy to David and his family.

And the American singer and actor Harry Connick Jr said Cassidy was a friend who "was always so kind to me".

so sad to hear of the passing of david cassidy… he was always so kind to me – such a pleasure to have had him on my show… sending love and prayers to his family… R.I.P. friend ❤️ pic.twitter.com/tsFkNiJzFc

Had you met David Cassidy? Do you have any interesting stories or pictures of your meeting? Please share your experiences with us by emailing [email protected]

IcetruckNovember 22, 2017
Like story:
tweet
What happened to Ralphie from ‘A Christmas Story’?
UN envoy for Syria urges opposition to unite before talks